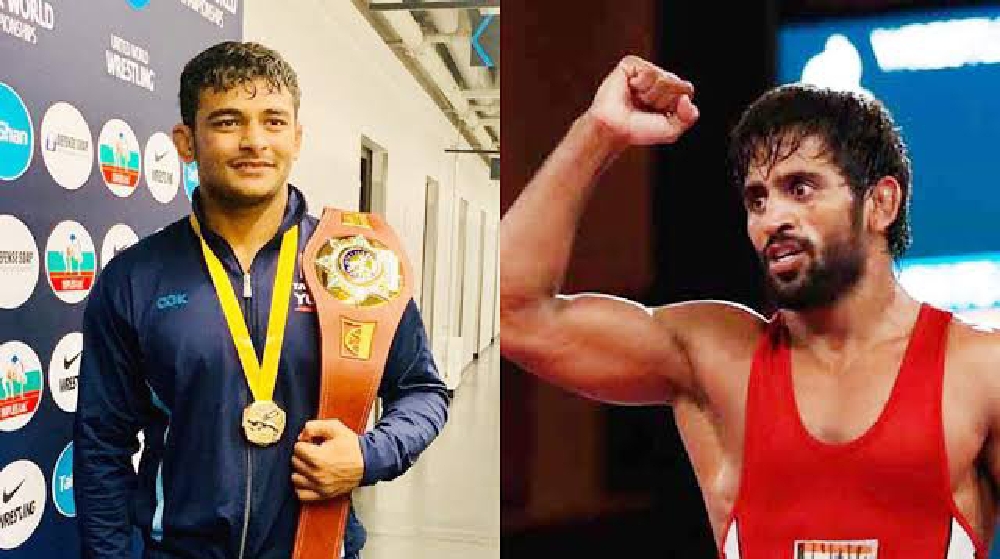 Are Bajrang Punia And Deepak Punia Brothers? Well, before we delve further into the frequently asked questions, let’s quickly recap the two well-known athletes in this post. Bajrang Punia is a Haryana-born freestyle wrestler from India. Currently, in the weight category of 65 kg, he holds the number two spot. At the World Wrestling Championship, he is the only wrestler from India to have taken home three medals. Following his victory in the bronze medal match at the 2020 Tokyo Olympics, he added an Olympic medal to his collection. In the playoff, he won 8-0 against his opponent to win his first Olympic medal.

Punia’s first Olympic competition was the 2020 Games, and he was one of India’s best medal prospects in Tokyo. Over the past three years, he has consistently shown strong performance at the most important tournaments. He won gold at the Asian and Commonwealth Games in 2018, as well as silver and bronze in the World Championships in both 2018 and 2019. He was one of the eight wrestlers from India that competed for his country in the 2020 Summer Olympics.

Deepak Punia, on the other hand, is a freestyle wrestler who focuses on the 86 kg competition. At the World Wrestling Championships, he competed for India and won a silver medal in the freestyle 86 kg category. Deepak has gained attention and is regarded as one of the best wrestlers in the nation. Deepak most recently took the top spot in the 86kg division. He presently has 82 points, which puts him four points ahead of the wrestler from Iran who was previously in the first place, Hasan Yazdani. As a member of the Indian wrestling team, Deepak Punia is one of the four competitors who have already qualified for the Olympic Games in Tokyo in 2020.

To learn more about the bond that exists between Bajrang Punia and Deepak Punia, read this article through to the end.

They were trained in the same akharas in the Jhajjar area of Haryana, where they both came from, and even perfected their craft at the Chhatrasal Stadium in New Delhi, where they both competed. In fact, UWW (United World Wrestling) has seeded both of them second in their respective divisions for Tokyo 2020. The 22-year-old has admired Bajrang since he was a child.

Deepak’s journey from the akharas to the Olympic mat has been filled with challenges and setbacks, just as it was for his senior competitor. At the akhara, he won his first dangal, and the prize money was only INR 5. But Deepak persisted in striving to be among the best, and he soon began to establish himself in the domestic sphere. Despite his financial difficulties, Deepak’s parents supported him wholeheartedly because they wanted their son to succeed.

Talking about Bajrang, he is the only wrestler from India to have taken home three medals from the World Wrestling Championship. Following his victory in the bronze medal match at the 2020 Tokyo Olympics, he added an Olympic medal to his collection. In the playoff, he won 8-0 against his opponent to win his first Olympic medal. Bajrang competed in his first Olympics at the 2020 Games and was one of India’s best medal prospects in Tokyo.

For the past three years, he has routinely fared well in important competitions. He won gold at the Asian and Commonwealth Games in 2018, as well as silver and bronze in the World Championships in both 2018 and 2019. He was one of the eight wrestlers from India that competed for his country in the 2020 Summer Olympics. So both the Punia’s are the best on themselves.

Punia was born in the Indian state of Haryana’s Khudan village in the Jhajjar district. When he was seven years old, he started wrestling, with his father supporting him in his endeavours. Punia was raised in a remote setting. His family lacked the resources for conventional sports. He was forced to participate in free sports like Kabaddi and wrestling instead. Punia’s family enrolled him at a nearby mud wrestling school when he was a little child because his father was also a wrestler.

Punia began to miss class to attend wrestling practice. In 2008, he visited Chattarsal Stadium, where Ramphal Mann trained him. In order for him to attend a regional centre of the Sports Authority of India, his family relocated to Sonepat the following year (2015). He currently holds the position of Gazetted Officer OSD Sports with the Indian Railways. Punia takes great pleasure in questioning the more experienced members of his village. Sangita Phogat Punia, a wrestler herself, is his wife.

Bajrang Punia earned bronze at the 2013 Asian Wrestling Championships in Delhi, earning him his first international medal. In the semi-finals, Bajrang was eliminated after suffering a loss to Hwang Ryong-hak of North Korea. As a result, he had to settle for the bronze medal. Later on, in that same year, Punia competed in and won the bronze medal match at the 2013 World Wrestling Championships. His opponent in that event was Enkhsaikhany Nyam-Ochir.

Bajrang Punia won his first international silver medal at the 2014 Commonwealth Games after falling short to David Tremblay of Canada. Punia settled for a silver medal at the Asian Games in the same year after losing to Masoud Esmaeilpour Jouybari of Iran in the championship match. By losing to Masoud Esmaeilpour Jouybari of Iran in the finals of the 2014 Asian Wrestling Championships, Punia earned the third silver medal. As a result of his fifth-place finish at the World Wrestling Championships in 2015, Bajrang Punia was unable to make a significant impression. Punia competed at the Commonwealth Wrestling Championships in Singapore in 2016 and won his first international gold medal there. In 2017, he successfully defended his gold medal.

Punia is one of the athletes competing in the Olympic Wrestling competition who has a chance to win a medal. At the Matteo Pellicone Ranking Series 2021, which took place in Rome, Italy in 2021, he competed in the 65 kg event and came away with the gold medal. Additionally, despite losing to Takuto Otoguro in the 2021 Asian Wrestling Championships final, he earned a silver medal.

Deepak Punia was born to parents named Shubhash Punia and Krishna Punia. He was up in a modest family in the village of Chhara. His father, Shubhash, is a milkman and a former wrestler. When Deepak was four years old, his father introduced him to wrestling. He had witnessed countless local mud wrestling matches in his village of Chhara while he was growing up. He is from a region where mud wrestling is a popular sport. Deepak frequently accompanied his cousin Sunil Kumar, who is older than him and a well-known figure in the village’s dangal (wrestling) scene, to the wrestling venue.

Deepak started competing in local wrestling and starting earning money after watching some of the matches in his area. Since his father, a milkman, had difficulty making ends meet, Deepak made the decision to relieve his family of some of the financial responsibility by participating in regional wrestling competitions. Virendra Singh recognized Deepak’s wrestling prowess at the school nationals and encouraged him to join the Chhatrasal Arena to advance his career. Deepak relocated to Delhi in 2015 and enrolled at Chhatrasal Arena.

He began practising with the academy’s teachers to develop his wrestling abilities. His biggest fan is Olympic medalist Sushil Kumar. He recommended him to concentrate on his work and develop his skills rather than accepting the Sepoy position in the Indian Army.

He won the Bronze medal in wrestling at the Asian Championship in 2020. Deepak Punia qualified for the 2021 Tokyo Olympics by making it to the World Wrestling Championship semi-finals. Given his early performance on a global scale, wrestling experts consider Deepak to be one of their top medal prospects.

ALSO READ: What Do Weightlifters Inhale? Does It Help In Lifting?

In this article:Are Bajrang Punia And Deepak Punia Brothers