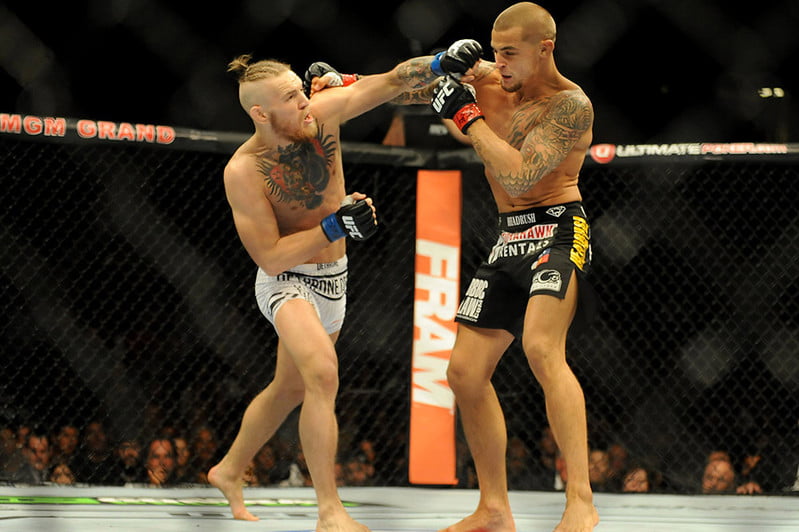 “I’m going to start training for UFC,” or “UFC is now one of the most popular sports in the world,” are common phrases nowadays, but are they accurate? The terms UFC and MMA are frequently used interchangeably and as synonyms. That, however, should not be the case.

So, why do so many people nowadays get these two mixed up? The emergence and popularity of UFC on a worldwide scale may be linked to this. Today, we listen to stuff like “Tune on this nighttime for UFC fantastic combat,” “three extra days until the finest combat in UFC history,” and “Fighter X is the brand new UFC heavyweight champion of the world” everywhere in the news.

Regular fans might frequently be confused about the distinction between MMA and UFC since the UFC has become so successful and is so much bigger than other MMA companies.

History of MMA And Its Name

Let’s start by explaining what MMA is to have a better idea. Mixed Martial Arts (MMA) is an acronym for “mixed martial arts.” Wrestling, Brazilian jiu-jitsu, boxing, kickboxing, Muay Thai, karate, taekwondo, kung fu, sambo, judo, and other martial arts and combat techniques are all incorporated into the sport.

In other words, in an MMA battle, any technique or move that may be effectively performed and, of course, is legal (see our page on the list of prohibited maneuvers in UFC fights) can be used.

Wrestling, karate, and kung fu are examples of combat sports with ancient origins. But what about mixed martial arts (MMA)? People believe that MMA is a new sport, however as I previously stated, it mixes methods from several martial arts. So, when did people start mixing these maneuvers for the first time?

Ancient China, specifically a martial art known as Shuai Jiao, also known as Kung Fu Wrestling, Chinese Judo, and Chinese Wrestling, has one of the first documented accounts of integrating maneuvers from diverse martial art schools dating back over 6,000 years.

Shuai Jiao practitioners were taught to butt and toss their opponents. It was created to aid warriors in hand-to-hand combat, and it is the first martial art to incorporate grappling and striking techniques.

Pankration was first introduced in Ancient Greece at the 33rd Olympiad in 648 BC. Pankration used aspects of boxing and wrestling, as well as kicks, throws, and a variety of submission attempts. Only biting, groin-striking, and eye-gouging were prohibited. The battle didn’t end until one of the competitors was no longer able to compete or was submitted by their opponent.

Fast forward to the nineteenth century, when certain tournaments were held with the goal of bringing together warriors from various fighting techniques. Fights between French Savate fighters and English bare-knuckle boxers, for example, were staged at an event in 1852.

A battle between John L. Sullivan, the world heavyweight boxing champion at the time, and William Muldoon, the Greco-Roman wrestling champion, took place in 1887. Muldoon is said to have slammed Sullivan to the ground at the end of the battle.

Baritsu tournaments were held in England in the late 1800s. Catch wrestling, judo, western boxing, Savate, and jiu-jitsu are some of the European and Asian combat methods used in this art.

Bruce Lee, dubbed the “Father of Modern Day MMA” by some, is without a doubt one of the most influential personalities in the history of mixed martial arts. Some argue that saying such about him is inaccurate, but it is undeniable that he was a strong proponent of learning new tactics and movements outside of your core fighting style.

In the late 1960s and early 1970s, he developed Jeet Kune Do, a fighting technique centered on merging the finest aspects of several martial arts into a single combat system.

Muhammad Ali faced Antonio Ioki, a Japanese professional wrestler, in a battle in 1976. The battle was fought according to a set of regulations. Many consider Ali’s global celebrity and the fight’s popularity to be the forerunner of modern-day mixed martial arts. The fight was called a draw.

Origin Of The Term MMA

The phrase “mixed martial arts” was originally used in a review of the UFC 1 event by television journalist Howard Rosenberg in 1993. UFC official Jeff Blatnick, who proposed the name alongside John McCarthy during the UFC 17 rules meeting, is responsible for the organization’s use of the word MMA.

The name “MMA” was originally introduced by the UFC in 1995; before that, the fights were referred to as “Ultimate Fighting.” That takes us to a quick overview of the UFC’s history and how it all began.

UFC was not what it is now two decades ago. There was no Conor McGregor, Ronda Rousey, or Khabib Nurmagomedov, no blockbuster bouts, outside-the-cage theatrics, or worldwide phenomenon. It was a competition in which participants from various martial arts backgrounds competed to see which combat style was the best.

After 20 years, the Ultimate Fighting Championship (UFC) has become a worldwide phenomenon. People enjoy seeing combatants compete in a cage with “no rules.” MMA is the purest form of combat and genuinely demonstrates who is the superior fighter overall. When you add in the outside-the-cage theatrics, it’s clear why UFC is where it is now.

Given the popularity of the UFC across the world, it’s not uncommon for individuals to use the phrases UFC and MMA interchangeably. Because UFC is such a well-known MMA promoter and brand, the term “UFC” is used more frequently than “MMA.”

The Ultimate Fighting Championship, or UFC, is the most well-known mixed martial arts organization on the planet. This organization showcases the top martial artist fighters who compete in a variety of martial art forms and disciplines. The modern name for the UFC game series is EA SPORTS UFC3. Five-minute rounds make up a regular UFC battle amongst the participants. The title bouts between the players, on the other hand, can be extended beyond the minute’s rounds. If any of the players tap out due to submission, or if the fighter is knocked out or is no longer defending himself, the fight can be stopped by the referee.

The UFC has been the most renowned promoter of the MMA sport. They are utilizing all other advertising initiatives that are now available or have already been utilized. The UFC is regarded as the largest platform in mixed martial arts, and it attracts some, but not all, of the best fighters from across the world. The UFC has its own format for its fighters that is not shared by the others. The UFC now has eight separate classes, which means that various weight champions compete for the top challenger. The UFC has an issue with the championship shot, which has fans scratching their heads.

The Main Difference Between MMA And UFC?

MUST-READ: What Can Happen In WWE Latest Fight 2022?