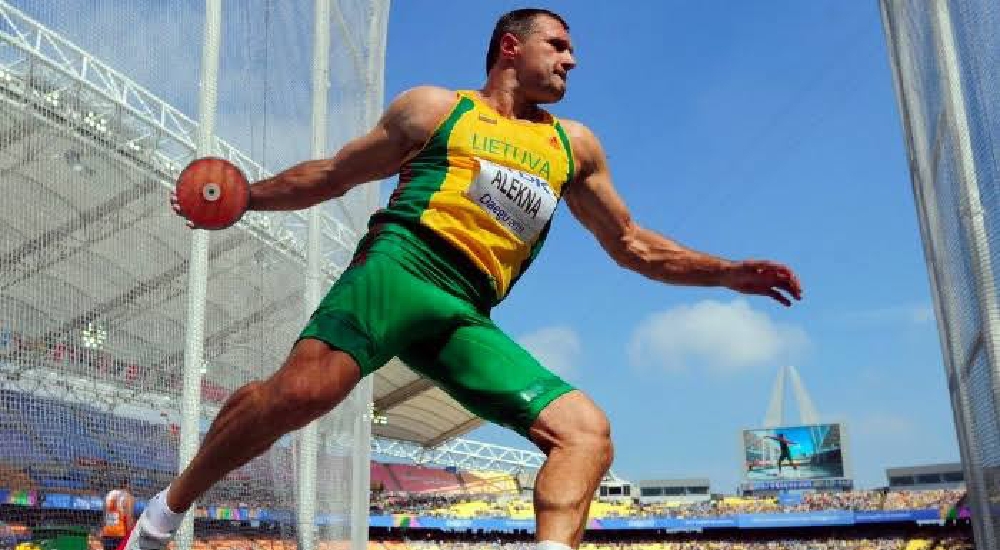 Is Discus Throw Dangerous? Well, this is the question that the majority of people are now searching over the internet. So, we, the team of thesportsunited, are here to discuss this hot topic in this article. However, before that, let’s quickly know in a nutshell about Discus Throw. Well, the discus throw, also referred to as the disc throw, is a track and field competition in which a competitor throws a heavy disc called a discus in an effort to greatly exceed them in distance.

The Discobolus statue by Myron from the fifth century BC serves as evidence that discus throw is a very old sport. It was a part of the ancient Greek pentathlon, which dates back to at least 708 BC, but it is not a part of the modern pentathlon. It is, however, a part of the modern decathlon. The competition involves throwing a disc whose weight or size varies depending on the participant.

The discs that men and women throw are of various diameters, and their weights and sizes depend on age. In international competitions, the weight of the discus is specified by World Athletics, whereas in competitions held in the United States, it is specified by USA Track & Field.

Henry Canine, who competed in high school discus events in the United States, was a proponent of a lighter-weight discus. The National High School Athletic Association took his advice to heart and implemented it that year. Continue reading if you are keen to learn the answer to the question “Is Discus Throw Dangerous?”

Yes, Discus Throw is a dangerous game. A strike from a discus has the potential to cause the fracturing of bones. Generally speaking, it won’t puncture the skin, but it can fracture skulls and cause internal bleeding. A discus that is thrown at full speed travels approximately 55 miles per hour and can traverse approximately 80 feet in one second, giving spectators very little time to respond to the event. After being spun around in a circle, the discus is then thrown. An early release poses a significant risk to the safety of those in the circle because they have only a fraction of a second to respond before the object reaches them.

A discus thrown within the sector has the potential to roll or bounce inexplicably. Its kinetic energy is mostly gone at this point, but it can still bruise. However, it can be reduced with the right safety measures, such as a net surrounding the circle. Therefore, discus throw can be completely safe as long as everyone is paying attention and the appropriate precautions are taken and enforced. They can only turn dangerous when people fail to pay attention to what is going on or when shortcuts are taken to ensure everyone’s safety.

What Is The Weight Of Discus?

Men’s and women’s discus weights are set at 2kg and 1kg, respectively. An athlete essentially throws the metal disc while circling it 2.5 meters in diameter. Disc throwers are only permitted to touch the inner edges of the throwing circle, not the top rim.

Beyond the circle, the athletes are not permitted to touch the ground. Additionally, it is a foul throw if the player crosses the circle before the disc touches the ground. Furthermore, a specific area has been designated for the disc to land, and if it lands outside of that area, the throw is deemed ineffective. At the Olympics, each competitor has eight chances to record their best throw.

The discus has a circular edge and a metallic rim and can be made of wood, plastic, fibreglass, or metal. It should have a diameter of 18 cm for women and 22 cm for men. The structure of the discus’s interior can either be solid or hollow; however, the edge’s cross-section must have a radius of 6 millimetres. Additionally, keep in mind that the discus’s sides are uniform and lack any sharp edges or irregularities in the pattern. The disc’s finish should be smooth as well to make it easier for athletes to grip it securely.

In order to protect the audience from a misthrown discus, a cage has been built around the throwing circle. It should be constructed so that it can support a disc that weighs almost 2 kg and is moving at a speed of 25 m/s. Additionally, it should be constructed so that the discus doesn’t bounce back toward the athlete after being hit. The cage is shaped like a “U,” with one side open for the discus to pass through. At the point in the structure that is the lowest, the height of the netting should be four meters, and either synthetic or natural fibre should be used.

ALSO READ: Is Sepak Takraw Dangerous? What Is This Game?

Discus throwing is a sport that dates back to the first Olympic Games in Ancient Greece, where it was first performed. Gymnastics instructor Christian Georg Kohlrausch and his students revived the discus as a sport in Magdeburg, Germany, in the 1870s. In the latter half of the 19th century, organized competition for men was restarted, and it has been a component of the contemporary Summer Olympic Games ever since the first modern competition, which took place at the Summer Olympics in 1896.

Images of athletes throwing discuses were extensively included in promotional materials for the early modern Olympic Games. This included fundraising stamps for the 1896 Games, as well as the main posters for the Summer Olympics in 1920 and 1948. The sport of discus continues to hold a particularly iconic position in the Olympic Games, despite the fact that it is now a standard event in all levels of modern track-and-field competition.

Frantiek Janda-Suk, a Bohemian athlete, was the first in modern times to throw the discus while fully rotating his body (the present Czech Republic). This method was developed by Janda-Suk after he carefully examined the placement of the renowned Discobolus statue. He won a silver medal at the 1900 Olympics after just one year of refining the technique.

In the early half of the 20th century, women’s competition started. After competition at the local and national levels, it was included in the 1928 Olympics’ schedule.

Discus Throw At The Olympics

The Olympic records for men are 69.89 meters, established by Virgilijus Alekna in 2004; for women, Martina Hellmann set the record in 1988 at 72.30 meters. A two-handed competition employing both left and right-arm putting techniques was held at the 1912 Stockholm Olympics, while a stone throw competition took place at the 1906 Intercalated Games. Both variants of the event have been competed in at the Olympics.

At the Olympic competition, each nation is permitted to send three discus throwers to compete. After competing in the qualifying round, only the top twelve athletes in terms of their throws will advance to the final. Each athlete has three chances to record their best throw. The top eight are given a further three chances based on their first three attempts, and their rankings are determined by the throw with the longest distance.

In the event of a tie, the second-best throw decides the winner. A tape measure is used to measure the distance between the discus’s initial point of contact with the ground to the interior of the throwing circle’s arc. The measuring tape is held by the officials with the zero end at the spot where the discus shattered the field, and it is then pulled to the center of the throwing circle. However, the distance is only calculated up to the point when the measuring tape crosses the circle’s inner perimeter.

Since the first World Championships in Athletics in 1983, both men and women have competed in the discus throw event. The competition structure normally involves two groups of athletes competing in a qualifying phase, and everyone who clears the qualifying height or finishes in the top twelve overall advances to the final round. The qualifying distance for the 2015 World Athletics Championships was 65.00 meters for men and 63.00 meters for women.

India’s most successful discus thrower is four-time Olympian Vikas Gowda. During the years 2004, 2008, 2012, and 2016, he met the requirements to compete in the Olympics. He has also won five medals in the Asian Championships, two at the Asian Games, and the same number at the Commonwealth Games.

Seema Punia, a veteran Indian discus thrower who won the gold medal at the 2014 Asian Games, is one of the sport’s most accomplished female competitors. The three-time silver medalist from the Commonwealth Games, however, was not selected for Tokyo 2020.

Kamalpreet Kaur, who is headed to Tokyo, is also becoming more popular. At the 24th Federation Cup Senior Athletics Championships, she broke the discus throw record for an Indian woman and qualified for the Tokyo Olympics in the meantime.

ALSO READ: Is Hammer Throw Dangerous? If Yes, How?

In this article:Is Discus Throw Dangerous