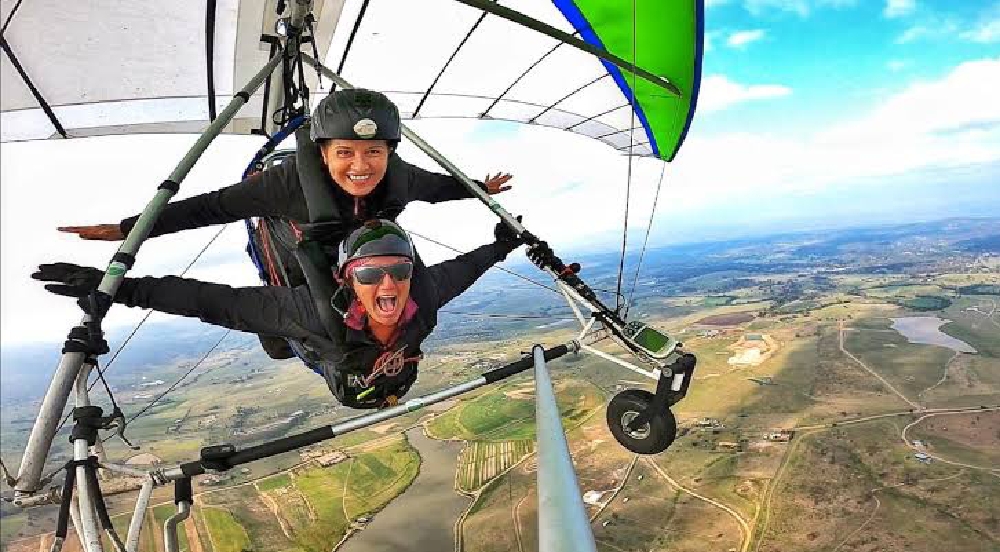 Any sport can be of either low risk or high risk. The person practising the sport frequently draws the fine line between safe and unsafe. The sport of hang gliding is considered to be high-risk; however, this does not always mean that participants will sustain injuries. After all, the pilot is ultimately responsible for the level of safety experienced by the hang glider. However, despite this, there are still some doubts that come up in people’s minds, the most common of which is “Is Hang Gliding Dangerous?”. So, in this post, we’ll go over some of the indisputable reasons why hang gliding is dangerous. But before we get into that, let’s quickly go over some basics of hang gliding.

Well, Hang gliding is a popular aviation sport in which a pilot operates a light, non-motorized heavier-than-air aircraft called Hang Gliders. The majority of today’s hang gliders have frames constructed of composite materials or aluminium alloys that are covered with synthetic sailcloth to form the wings. Typically, the pilot operates the aircraft by moving their body weight in opposition to a control frame while they are restrained in a harness that is suspended from the airframe of the aircraft. Due to the low lift-to-drag ratio of early hang gliders, pilots were limited to gliding down short hills.

Pilots have been able to soar for hours, gain thousands of feet of height in thermal updrafts, execute aerobatics, and glide cross-country for hundreds of kilometres since the 1980s, when this ratio considerably improved. Some parts of hang gliding are regulated by the Federation Aeronautique Internationale and national airspace governing organizations. Obtaining the safety benefits of being instructed is widely advised, and in many countries, it is a legal obligation. So, let’s take a deeper look at some of the aspects that shows us Hang Gliding Sport’s image as a risky sport.

When it comes to hang gliding, the risk lies in the pilot, not the sport. Aviation, in general, entails a higher level of personal danger than most other pursuits. The simple reason is that aviation involves systems with a high quantity of kinetic and potential energy that, if not managed properly, can go out of control and cause damage to your equipment and body. So either the pilot can control the risks, or he or she cannot.

Hang gliding is a really risky activity if he or she is unable to do so. Aside from that, many pilots have been hang-gliding for decades with no or little harm compared to what you’d expect from football. Driving to the area on the highway is the most dangerous element of the sport for them. As a result, the question can only be answered in the context of the particular pilot in consideration. As a result, hang gliding is thought to be inherently risky.

In a word, this activity entails you floating above the surface while suspended by wires and cloth from aluminium frames. This is why all hang gliding fans; not just students must take the sport seriously. Your safety is mostly determined by how you approach the sport and how well you prepare for situations.

Why Is Hang Gliding So Dangerous?

Hang gliding is deemed dangerous for a variety of reasons. Some of which are:

This is an example of a hazard over which we, as humans, have no control. If you’re deciding whether or not to fly, one of the first things you should consider is the weather. Weather conditions change frequently, and you must be prepared to react quickly.

One of the most exciting aspects of our sport is that our equipment is constantly improving in terms of performance (we can fly farther and faster) as well as safety. As a result, some risks exist as a result of device failure. Before you even consider flying, you must confirm that your equipment is properly assembled and that there is no risk of mechanical failure while in the air.

One of the most important qualities for a pilot to learn is sound judgment. As some hazards are solely the result of human error. Judgment and decision-making are two of the most important abilities for a pilot to master. When you’re in the air, you’ll be the only one who can make decisions, so acquiring strong judgment and the ability to make quick decisions will help you avoid accidents. As a result, if you can do this, you’ll be able to manage the risks of hang gliding and take flight!

ALSO READ: Is Soccer Popular In The USA?

If you fly during peak season, when there are a lot of other people flying, this may cause problems for you as well. When you fly too close to other flyers, or they move too close to you, accidents can happen. So, always keep an eye out for potential danger and remember to be aware of your surroundings.

Although you may not be able to manage some of these dangers, there are steps you can take to protect your safety and the safety of others. Hang gliding is as safe as you make it, as professionals say about the sport.

What Are the Potential Risks of Hang Gliding?

Read on if you’ve ever wanted to get serious about a sport but are curious about the dangers you’re taking. Accidents can range from being relatively minor to being extremely disastrous; even skilled hang gliders are not immune to this risk. Lacerations, broken bones, dislocations, and strained or sprained muscles are examples of minor injuries, while minor accidents can result in damage. Major collisions, on the other hang, may result in:

Minor or significant injuries can occur during the launch and landing of the hang glider, as well as while in the air. If you are involved in a hang gliding accident, get medical assistance as soon as possible, whether or not you believe you have been harmed.

How to Stay Safe When Hang Gliding

Before you fly, you should take the following steps to reduce the risk of hang gliding:

Hang gliding is a fascinating sport, but you should be informed of the risks before taking to the skies. You can help reduce the chance of injury or accident while participating in this thrilling activity by following safety precautions.

Hang Gliding Accidents: How Common Are They?

Unfortunately, hang gliding accidents are not well-tracked, making it difficult to estimate how common they are. Because the sport is so uncontrolled, it’s difficult to accurately estimate the global accident rate. However, it has been stated that the accident rate has reduced dramatically during the recent decade. This is due to improved equipment and more stringent pilot training. Hang glider pilots in the early days learned their craft by trial and error, and gliders were often home-built. For today’s pilot, training programs have been established with an emphasis on safe flight and the discipline to stop flying when weather conditions are poor. The most common hang gliding accidents occur when the pilot loses altitude quickly, collides with the ground, or collides with a fixed object such as buildings, trees, or a mountain.

According to the United States Hang Gliding and Paragliding Association (USHPA), between 2000 and 2016, the number of hang gliders expanded from 3000 to 6000, resulting in an average of roughly three deaths per year. According to the USHPA, the true figure could be higher. The number of fatalities in hang gliding is difficult to reliably calculate due to the sport’s widespread unregulation. In addition, most pilots take courses that lead to the FAI‘s internationally recognized International Pilot Proficiency Information card.

In the event of a significant emergency, the parachute is manually deployed (either by hand or with the help of a ballistic assist) and brings both the pilot and the glider down to the ground. Pilots also wear helmets and carry a variety of safety equipment, including knives (for cutting their parachute bridle after impact or cutting their harness lines and straps in the event of a tree or water landing), light ropes (for lowering from trees to haul up tools or climbing ropes), radios (for communication with other pilots or ground crew), and first-aid supplies.

Is Hang Gliding or Skydiving a Safer Option?