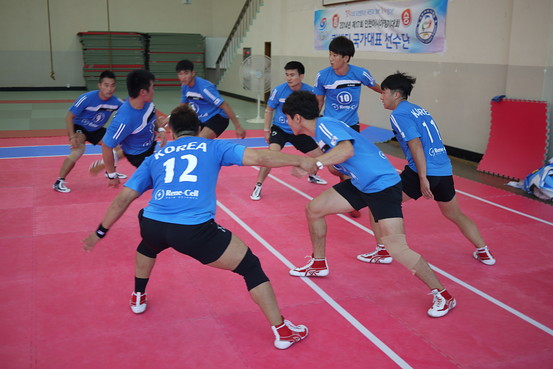 Some Asian Games sports are consistently dominated by the same country year after year. Typically, this occurs because a sport originated in a certain region; for example, China is likely to win wushu, Korea will win taekwondo, and Thailand will win sepak takraw. In the contact sport of kabaddi, India almost always wins.

On the other hand, during the 18th Asian Games on August 24, a foreign country bludgeoned its way into the final. The Korean men’s team won silver in a surprise final that included no India for the first time in Asian Games history, just 11 years after the Korea Kabaddi Association was founded.

The team’s best-ever finish was a silver medal, after losing 15-26 against reigning champion Iran in the final. Not only that, but Korea upset India, a seven-time Asian Games gold champion, 24-23 in the group stages before facing Pakistan in the semifinals, a team that has never failed to reach the last four.

Kabaddi is an Indian contact sport with a long history. The goal of the game is for a “raider” to cross the court to the opposite side and tag out as many defenders as possible before returning to his side. However, the raider must do it without being tackled and without taking a single breath while continually saying “kabaddi, kabaddi, kabaddi.”

Points are earned for each player tagged by the raider on a 12.5-meter by 6.25-meter (41-foot by 20-foot) court, while the other team can win points by stopping the raider.

In 2014, Korea made a surprise appearance on the kabaddi court, claiming bronze at the Incheon Asian Games. Despite Korea’s progress, overcoming India in the group stages was such a shock to the kabaddi world that it sent shockwaves across the world. The shock was perhaps more spectacular in kabaddi circles than the Korean football team’s victory over top-ranked Germany at the 2018 FIFA World Cup.

Defenders of the title In the last minutes of the league games, India was defeated by South Korea by a single point (23-24). The Korean squad outperformed the Indian team, led by Ajay Thakur, in every aspect. South Korea has defeated India in a competition for the second time in two years, the first time being in the 2016 Kabaddi World Cup League stages. Let’s take a look at 5 reasons why South Korea may beat India, the overwhelming favorites.

MUST-READ: Is Cricket Overrated In India?

Ashan Kumar is coaching South Korea for the duration of the Asian Games, something few people are aware of. Next season, he will also be the coach of Puneri Paltan. The fact that he focused on defensive tactics and game management was a key component in his victory over India.

The media and fans both chastised India’s team selection for failing to provide adequate right cover. For such an important competition, Surjeet Singh. All-rounders were deployed as makeshift covers as the squad became increasingly raid-focused. When India attempted a comeback in the second half, the lack of a solid right and the left cover was obviously evident. Raiders may win games, but it’s a defence that wins tournaments!

Kabaddi isn’t only about raiding and defending; it’s also about controlling the game and utilizing your head. South Korea triumphed without inflicting a single all-out attack on India. They played on the Do or die raids once they grabbed the lead. From the last few minutes of the first half to the first five minutes of the second, India used three raiders and a defender, while Korea used a DO or die raid, knowing full well that they had the upper hand.

They also maintained the early momentum obtained by their raiders’ advantage and never wavered in their focus and ferocity. Although the Indians put forth a lackluster showing, the game was won by South Korea because of their professional and meticulous approach.

Over the previous five seasons, many members of the South Korean squad have had extensive pro kabaddi experience. In the first half, Raiders like Jang Kun Lee and Dong Geon Lee utilised all of their knowledge from earlier encounters against India. The defence, led by Young Chang Ko, backed up the raiders admirably. This also demonstrates the impact of Prokabaddi on a global scale, demonstrating that Kabaddi as a sport is evolving.

Indian raiders are known for exploiting defensive mistakes, but this Korean squad made very few. Ajay Thakur and Rohit Kumar, for example, struggled against the well-organized defence. Any Korean player did not throw up any easy points. The Indian raiders were kept in check by cover defenders in particular. In the second half, only Monu Goyat and Pardeep Narwal were able to score against the powerful Korean defence.

ALSO READ: Why Rugby Players Are So Big? The Answer Is Here!

In this article:Is Kabaddi Famous In Korea, kabaddi in korea