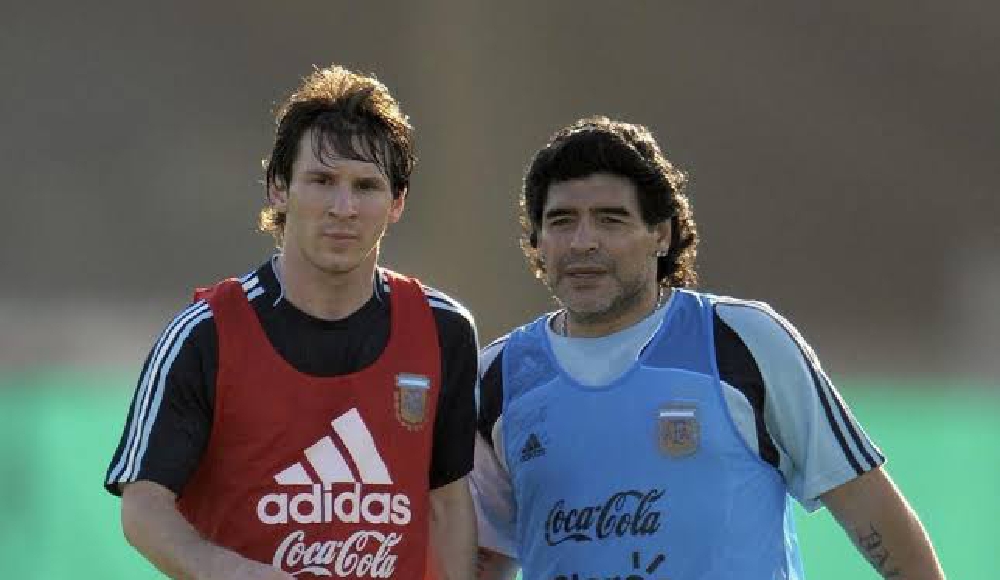 Is Messi Better Than Maradona? Well, before going into detail on this frequently asked question, let’s quickly know in a nutshell about Messi and Maradona. Well, it didn’t take Diego Maradona long to ascend the ranks and become the best football player in the history of the game because of his incredible footwork, powerful assists, accurate passes, and excellent dribbling action.

This incredibly gifted young man, who is proud to represent Argentina, was born to play the sport. As a result, despite having a modest upbringing and unstable finances, he began playing football at the age of ten and made his professional debut at the age of 16. He had an advantage over other players thanks to his tiny body and strong physical composition, which also enabled him to reach the heights of glory.

He progressed from an unskilled club player to the most sought-after soccer player throughout the course of a career lasting over 21 years. In his 91 international appearances, he registered 34 goals. He won the FIFA Player of the 20th Century accolade due to his brilliant on-field performance alone. A World Cup record in and of itself, he is the only player to have represented his team sixteen times as captain.

On the other hand, Lionel Messi, a former professional football player from Argentina, is regarded as one of the greatest players in football history. He is the only player in history to have garnered five FIFA Ballons d’Or, and he was the first to receive three European Golden Shoes. During his time as a player, he broke a number of global records, and he currently owns the record for the most goals scored in La Liga.

He was up in a central Argentina family that was passionate about football, and he spent his early years playing the game with his brothers. Messi made his professional debut at the age of 17, and he quickly cemented himself as a key member of the Barcelona team. His first significant achievement came in the 2008–09 campaign when he assisted Barcelona in winning the first triple in Spanish football history.

He went on to become Barcelona’s all-time leading scorer in recognized tournaments throughout the subsequent years. After Argentina’s defeat by Chile in the Copa América Centenario final, he announced his retirement in 2016. However, a push to persuade him to reconsider quickly started and Messi ultimately changed his mind. Get to know who is the best between Messi and Maradona by reading on further.

Is Messi Better Than Maradona?

The discussion between Diego Maradona and Lionel Messi is both contentious and also quite subjective. However, sport provides a platform for discussions of this nature, which is one of the most enduring aspects of the industry. It’s virtually hard to choose between Maradona and Messi as the superior player. But it’s a discussion worth having. If brilliance is only measured in terms of numbers, Messi easily defeats Maradona.

Does Messi really outweigh Maradona? Well, it’s not really that easy. Football greatness isn’t determined solely by goals scored, and awards won. The game was different back in the 1980s and the early 1990s, to start, especially during the 1980s, when Italy’s ultra-defensive and reactive brand of football became increasingly popular after the country’s victory in the World Cup in 1982. Messi has spent his whole club career playing for Barcelona, the dominant team in Spanish football. He has always been the team’s face, but the team didn’t need him to carry it.

Football was sometimes so defensive when Maradona played that Fifa had to start a “go for goals” campaign. According to Serie A statistics, 1.93 goals were scored per game in 1986–1987.

The average number of goals scored in La Liga during Messi’s first season with Barcelona, which took place in 2008-09 and was managed by Pep Guardiola, was 2.90. Football began to welcome attackers in the middle of the 1990s and especially after the turn of the century. The groundwork for a constructive transformation was created by Johan Cruyff’s tenure as Barcelona’s manager. Its cascading impact benefited attacking players of his generation, including Messi.

Who Had A Tougher Route To Success?

Maradona was a product of his environment, which was marked by destitution and ferment. His early years were spent amid the squalor of Villa Fiorito, a neighborhood outside of Buenos Aires. He witnessed the Argentine coup d’état and the imposition of martial law as a teenager in 1976.

The socioeconomic climate of his nation in the late 1970s and early 1980s had an impact on Maradona’s persona. Argentina’s per capita income decreased by more than 20% between 1975 and 1990, according to economic data from several sources.

Maradona had endured a great deal of hardship. Messi, on the other hand, discovered tranquility and success in Barcelona, where he moved when he was 13 years old. The football team Barcelona modified its configuration and system to accommodate him. No player at any other team in Europe’s top division enjoyed that benefit.

What Is Lionel Messi’s Net Worth?

Lionel Messi’s net worth is a topic of conversation on all social media platforms right now. You are going to be astounded by his net worth. The Argentine footballer Lionel Messi has a net worth of $400 million. He does indeed earn $400 million USD annually. It’s not particularly shocking. Because winning an Olympic gold medal and being a fantastic footballer adds to a player’s net worth. He receives a fantastic compensation package. He receives about $700 a week.

According to estimates, Lionel Messi receives a salary of almost 70 million euros annually. And according to recent data, his salary will be 7.1 crores EUR in 2022. He receives roughly $34 million in endorsement payments. Lionel Messi also has his own company, The Messi Store. He represents the Hard Rock brand as an ambassador. His wages at PSG will become evident in the future as he is about to move there.

Messi’s professional career began in 2000 when he joined the junior system ranks. Within a short period of time, he became the first player in the league to have played for all five different teams. Messi’s rapid advancement through the junior system tiers to his league debut on October 16, 2004, against RCD Espanyol was evidence of his skill as a player.

The next year, on May 1, 2005, he scored his first goal against Albacete. He made history by becoming Barcelona’s youngest player to ever score in a La Liga match. Due to the striking resemblance between Messi’s goal-scoring gesture and Maradona’s, the nickname “Messidona” was given to him.

Messi had a good year in 2009, helping his club win La Liga and then the Champions League in addition to his first Copa del Rey. Following Argentina’s defeat by Chile in the Copa América Centenario final on June 26, 2016, he declared his retirement from international football. After he retired, a movement was started to persuade Messi to reconsider. On August 12, 2016, it was revealed that Messi had changed his mind and had participated in Argentina’s World Cup campaign in 2018.

ALSO READ: Why IPL Is Better Than ISL?

Diego Maradona made his debut in the professional soccer league with Argentinos Juniors in 1976, just a few weeks before his seventeenth birthday. He appeared in 167 matches and scored 115 goals during his five years of affiliation with the club squad. His official debut for his country on the international stage came on February 27, 1977, when they played Hungary.

On June 2, 1979, he scored his first goal as a senior against Scotland at Hampden Park. The final score was 3-1 in favour of Argentina. He represented Argentina in the FIFA U-20 World Cup in 1979, and he contributed to the team’s victory. Maradona was the tournament’s standout performer and took home the Golden Ball trophy for being the greatest player.

He participated in his first World Cup competition in 1982. Despite the fact that they were the reigning champions, Argentina did not perform up to expectations and was eliminated from the competition in the second round. They were defeated by Brazil and Italy, who went on to win the tournament. After his team was eliminated from the World Cup, he was sold for a world record cost of 5 million euros to play for FC Barcelona in Spain.

He participated in just two matches at the 1994 FIFA World Cup, scoring one goal before being eliminated due to a positive ephedrine drug test. His 17-year international career came to an end at this time as well. He appeared in 91 games and scored 34 goals. He went back to Boca Juniors in 1995 and played there for two years until declaring his retirement on the eve of his birthday in 1997.

ALSO READ: Ronaldo Vs Mbappe: Who Is Better? Who Would Win A One On One?

In this article:Is Messi Better Than Maradona