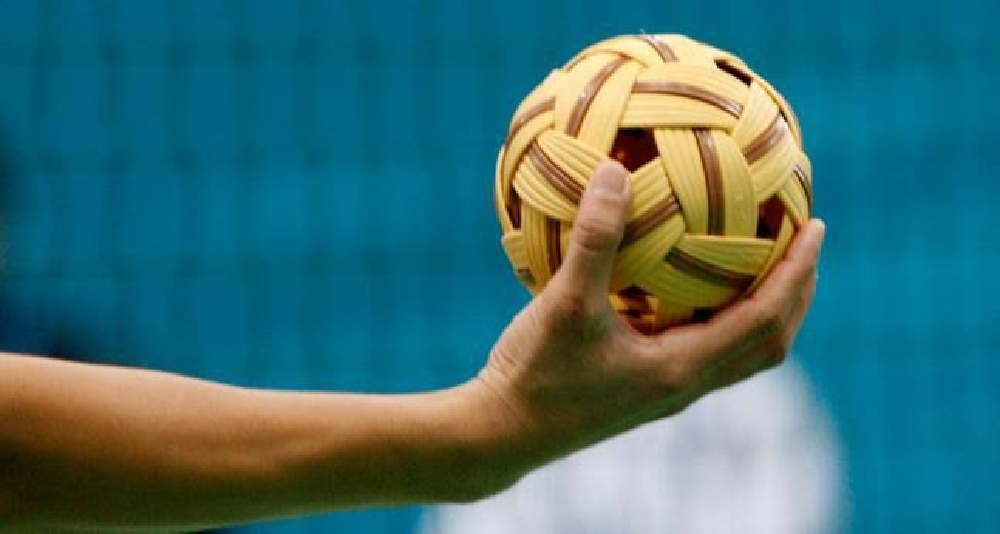 Sepak Takraw is a foot volleyball game in which participants exclusively use their feet, knees, chests, and heads to touch and control the ball. The guidelines for play are extremely similar to those found in volleyball. The objective of the game is the same. The game is played all over Southeast Asia using a ball made up of rattan or synthetic material, and it is highly well-liked. Since the year 1990, the sport of sepak takraw has been a part of the Asian Games.

The sport’s name is derived from the countries where it is most popular. The Malay word for the kick is sepak, and the Thai word for the woven ball is takraw. The ball is composed of synthetic fibre and is spherical. Similar to volleyball, two teams of players attempt to control the ball by touching it solely with their feet, chest, knees, or heads and kicking it past the net to the opposing side.

Failure to kick the ball past the net earns the opposing side a point, and the team that scores the most points is proclaimed the winner. The court should be roughly the same size as a badminton court (13.4 m long, 6.1 m wide), and the net should not be higher than 1.52 m. Like volleyball, the game can be played both indoors and on the beach. So, let’s take a deeper look at Sepak Takraw and the facts around it.

Sepak Takraw is, without a doubt, a dangerous sport. It is dangerous for people who are not skilled. To play this game safely, you’ll need a lot of skill. As a result, Sepak Takraw, also known as Kick Volleyball, is a one-of-a-kind sport. It is a Southeast Asian sport, as the name suggests. It has all the qualities of an engaging spectator sport with its acrobatic kicks, which are similar to the bicycle kick in football. For the ISTAF World Cup, Team Thailand is currently ranked first in both men’s and women’s sepak takraw.

Thai players are also noted for mastering some of the game’s most difficult techniques. The International Sepak Takraw Federation governs the sport. The ISTAF World Cup and the ISTAF Super Series are two major competitions. It also makes an appearance at the Asian and Southeast Asian Games. It has not yet been designated as an Olympic event. Nagpur is the headquarters of the Sepak Takraw Federation in India.

How Did Sepak Takraw Start?

You may have never heard of sepak takraw, yet it is a popular Asian game that has been played for generations. Its origins are unknown, but it has deep and enduring roots in a number of Southeast Asian countries, including Malaysia, the Philippines, and Thailand. The term “sepak takraw” is derived from a mix of the Malay word for “kick” and the Thai name for the game’s ball. Huge tournaments are held all across Asia, and the sport’s popularity is slowly but steadily growing over the world.

What Are The Rules Of The Sports Sepak Takraw?

A team consists of three players: the server, who must stand in a circle near the court’s end, and the striker and bowler, who must stand on opposing sides of the net. The only parts of the players’ bodies that are permitted to make contact with the ball are their feet, heads, knees, and chests. It is not permitted to use one’s hands or arms. Before sending it over the net, a team is allowed a maximum of three touches.

A single player can also do all three touches. A team loses a point if they have more than three touches. A team can lose a point if the ball leaves the area of play if it strikes the net and returns to the same side of the court, if the server raises his foot away from the circle during the service, or if the players leave their respective circles before the ball travels over the net. Every three points, regardless of who wins the point, the serve changes.

What Is The Scoring Methodology?

The maximum number of sets in a team event is three. The winner is the side that wins the first two sets. The set is won by the first side to score 15 or 21 points (depending on the game). A team must not only win 21 points but also have a two-point lead to win a set. If the score is knotted at 20-20, the set is won by the team that first gains a two-point advantage or reaches the 25-point ceiling, whichever occurs first.

• Roll Spike: A sun back spike that is performed with a flip

• Inside kick: Using the inside of your foot to strike the ball

• Knee kick: Using your thigh to strike the ball

• Header: Using your forehead to strike the ball

Around 500 years ago, Malaysians invented Sepak Takraw. During the 15th century, the royal court was where the game was most commonly played. Around the 16th century, the game became popular in Indonesia, where it was known as Sepak Raga. By 1940, the game’s net version had spread throughout Southeast Asia, and the game’s formal rules and regulations had been established.

On May 16th, 1945, the first official Sepak Takraw competition was conducted at a swim club in Penang, with teams largely participating from Penang’s villages. The name “Sepak Raga Jaring” has been in use for the game throughout that time period. Slowly but surely, the game made its way across Southeast Asia, and by the 1950s, virtually every school in the region had a team playing it.

There are various players to consider if you’re looking for the top player in sepak takraw.

Hussein Ebang, a midfielder for Sepak Takraw, has been an integral part of the team’s success. His performance has aided the squad in becoming the first to win a series in South Africa in two decades. The team also made history by defeating England in the first Test match, and they currently hold the record for the longest Test series between two teams.

Hussein Ebang has won a gold medal and is widely regarded as the top player in the sport due to his remarkable talents and uncanny coordination. He is recognized as the poster boy of Thai soccer and is one of the greatest players in the Sepak Takraw division. His remarkable goal-scoring record has made him a big star, and he is regarded as one of the sport’s top talents. Takraw’s huge body is suitable for playing in the middle of the field, and his athleticism makes him an excellent pick for that position.

Nofrizal is regarded as the national sepak takraw team’s finest player. Unlike most other sports, this one requires a higher level of athleticism and expertise. Nofrizal is an excellent role model for young players, as he plays the quadrant, regu, and double sepak takraw positions. He is regarded as one of the top players in the country and serves as an inspiration to all aspiring athletes.

In the country, there are a number of top players. Alias, the Philippines’ gold medalist in the 2018 Southeast Asian Games, is regarded as a top striker. As the top player in Sepak Takraw, Nofrizal has also won the hearts of many admirers. He has the highest-scoring percentage in regu, quadrant, and double sepak takraw. Because of his versatility, Nofrizal is the best player in the game right now.

ALSO READ: Is Kayaking Safe? Do They Get Flipped Easily?

He’s widely regarded as the best Sepak Takraw player in the world, thanks to a bizarre serving style known as a “horse kick,” which is unrelated to the Donkey Punch but as effective. Suebsak is a superstar in Thailand, which has won practically every Sepak Takraw competition to date—so famous, in fact, that he’s now a Thai movie star, starring in the action flick Born to Fight.

Anuwat Chaichana’s achievements speak to why he is famous, with several gold medals. He is a key member of Thailand’s squad. He is widely regarded as one of the best sepak takraw players of all time. It’s no surprise that he’s a great sepak takraw player because he’s such an experienced striker with so much force.

Harish Kumar rose to prominence as a part of the Indian Sepak Takraw team that won bronze in the Asian Games in 2018. Kumar is not only a sepak takraw medallist, but he also works as a tea server at his family’s business, which has piqued the public’s interest. Harish Kumar rose to prominence as a result of his poor beginnings. He juggles his love of sepak takraw with the needs of his huge family. Harish Kumar’s unwavering passion for the sport and his family has been featured in numerous news publications and social media posts.

ALSO READ: Sports That Are Not Included In Olympics And Why?