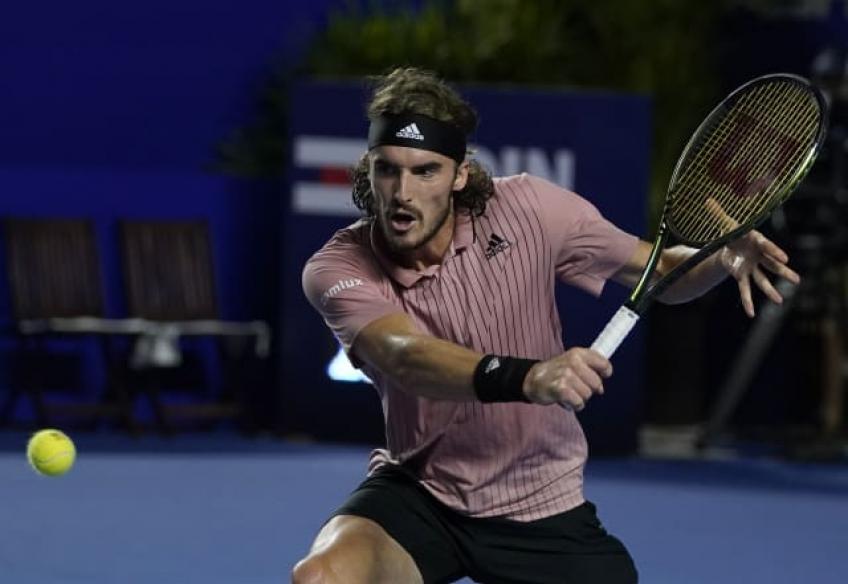 Stefanos Tsitsipas who was born on August 12, 1998, is a professional tennis player from Greece. The Association of Tennis Professionals (ATP) has placed him as high as world No. 3, which he first attained on August 9, 2021, making him the highest-ranked Greek player in history. Tsitsipas won the 2019 ATP Finals, becoming the first Greek to win the year-end tournament in eighteen years. He has seven ATP singles championships and reached a major final at the 2021 French Open, where he was defeated by Novak Djokovic after leading by two sets to love. He has also reached the Australian Open semifinals three times.

Tsitsipas was exposed to tennis at the age of three and began taking lessons at the age of six. His mother, Julia Apostoli, was a professional on the Women’s Tennis Association (WTA) circuit, while his father was trained as a tennis teacher. He was ranked No. 1 in the world as a junior. With his victory in the 2016 Wimbledon boys’ doubles tournament, he became the third Greek player and the first Greek man in the Open Era to win a junior Grand Slam championship. Since 2015, Tsitsipas has been a student at the Patrick Mouratoglou Academy in France.

Tsitsipas made his ATP Tour debut in late 2017 and swiftly rose up the rankings the following year. In 2018, he made three tour-level finals and won his maiden tournament, the Stockholm Open. He became the youngest player to defeat four top 10 opponents in a single event with his runner-up result at the Canadian Open. Tsitsipas has been selected Greek Male Athlete of the Year for 2019. Tsitsipas has been a regular in the top ten of the ATP rankings after finishing his season with an exhibition triumph at the Next Gen ATP Finals. At the 2021 Monte-Carlo Masters, he won his first Masters 1000 tournament.

Tsitsipas’ parents, who both have strong tennis histories, initiated their oldest son on the sport at an early age. Stefanos stated, “In the time between sessions, I remember being three years old and hitting balls with my father. As a child, I recall watching games on television; I don’t recall who was playing, but I recall watching.” As a youth, he also dabbled in other sports including football and swimming.

At the age of six, Tsitsipas began taking lessons at Tennis Club Glyfada in Athens, where he has continued to train. His father has always been his major coach, and he went to the University of Athens to study tennis coaching in order to aid his children. Tsitsipas began training at the Patrick Mouratoglou Academy in 2015, dividing his time between France and Greece at the time.

Tsitsipas is a former No. 1 junior in the world. At the age of 14, he began playing on the ITF junior circuit. He didn’t compete in any high-level Grade A events until the Abierto Juvenil Mexicano in November 2014, but a month later, at the Orange Bowl, he made it to the final of his second career Grade A event. Tsitsipas had entered the competition with a junior rating outside of the top 100. Tsitsipas was given his first chance to compete in junior Grand Slam events in 2015. His highest finish in these four competitions was a quarterfinal at the Australian Open.

He didn’t win any singles finals that year, but he did place second in the Orange Bowl, this time against Miomir Kecmanovi in a third-set tiebreak. He was the world’s No. 14 junior at the end of the season.

Tsitsipas had a breakout year in 2016, reaching the quarterfinals or better in all eight events he entered, including all four Grand Slams. [18] After winning his first Grade A championship at the Trofeo Bonfiglio, he became the world’s, top-ranked junior.

Tsitsipas’ best triumph of the season came in doubles when he won his first junior Grand Slam tournament at Wimbledon partnering with Estonian Kenneth Raisma.

After Nicky Kalogeropoulos won both the French Open and Wimbledon in 1963, he became the first male Greek to win a junior Grand Slam in the Open Era. Apart from his doubles victory, Tsitsipas also had his finest results in the Grand Slam singles competitions that year, reaching the semifinals at Wimbledon and the US Open. He finished the year as the world’s No. 2 junior, trailing only Kecmanovi, who had competed in more competitions.

MUST-READ: Is The Ultimate Warrior In The WWE Hall Of Fame?

Later that year, Tsitsipas won his maiden Futures title, and he would go on to win a total of eleven, five in singles and six in doubles, by the end of 2016.

He also won his first Challenger match at Mohammedia, Morocco, near the end of 2015.

Later that October, his performance in Africa helped him break into the top 200.

Tsitsipas received a qualifying wild card into the Swiss Indoors in Basel, his first ATP Tour event, at the conclusion of that month. After defeating Rajeev Ram in the first round, he was unable to qualify due to a loss to Robin Haase in the second round.

Tsitsipas earned his first Challenger victory in Genova after failing in qualification at the US Open.

During the season, he qualified for a tour-high eight events, including Wimbledon and the Shanghai Masters. He did not win a tour-level match until the very end of the season, when he upset Karen Khachanov, a fellow NextGen player, in Shanghai.

Tsitsipas made his first ATP semifinal as a qualifier at the European Open in Belgium the following week. During the tournament, he defeated hometown favorite and world No. 10 David Goffin for his first top ten wins. Tsitsipas became the first Greek player to reach the top 100 of the ATP rankings with this performance, and he did so at the age of 19.

Tsitsipas made his first ATP semifinal as a qualifier at the European Open in Belgium the following week. During the tournament, he defeated place of origin preferred and international No. 10, David Goffin, for his first top ten wins. Tsitsipas became the first Greek player to reach the top 100 of the ATP rankings with this performance, and he did so at the age of 19. He also rose to the point where he was designated an alternate for the Next Gen ATP Finals.

Tsitsipas began the year as a qualifier in the Qatar Open, where he lost in the quarterfinals to world No. 5 Dominic Thiem. His greatest success in the early-year hard court season was another quarterfinal at the Dubai Tennis Championships, after losing in the first round of the Australian Open. During the clay-court season, Tsitsipas had his first breakthrough of the year in the Barcelona Open, as he reached his first career ATP final without dropping a set.

He defeated three top 20 players in the ATP 500 Series competition, including No. 7 Thiem, before losing to world No. 1 Rafael Nadal in a lopsided encounter. Tsitsipas climbed into the top 50 with this victory, becoming the second Greek to reach an ATP final, following Nicky Kalogeropoulos in 1973. In Greece, where tennis is not a popular sport, his performance drew national notice.

He overcame second seed and No. 14 Fabio Fognini in the semifinals before defeating experienced qualifier Ernests Gulbis in the final as the third seed. He became the first Greek player to win an ATP championship with his triumph. Tsitsipas’ season came to a stop in the Next Gen ATP Finals. He was seeded first and was paired with Frances Tiafoe, Hubert Hurkacz, and Jaume Munar in the event. Tsitsipas won his group and beat Andrey Rublev to reach the final, where he will face second seed Alex de Minaur. He won the Next Gen Finals in four sets over de Minaur. Tsitsipas has voted the ATP Most Improved Player for his breakout season at the end of the year.

Tsitsipas had a great clay-court season as well. After defeating Pablo Cuevas in the final of the Estoril Open a month later, he earned his first career clay-court title. He reached another Masters final the following week at the Madrid Open. He beat No. 4 Alexander Zverev and No. 2 Rafael Nadal in the quarterfinals and semifinals, respectively, before losing to No. 1 Novak Djokovic in the final. It was his first win against Nadal in four tries.

He then reached the semifinals of both the Shanghai Masters and the Swiss Indoors, losing to No. 4 Daniil Medvedev and No. 3 Roger Federer, respectively. Tsitsipas qualified for the ATP Finals for the first time at the end of the season, where he was drawn in a round-robin group with Nadal, Zverev, and Medvedev. After two sets, he overcame both Medvedev and Zverev to reach the knockout stages.

He was seeded fourth in the men’s bracket at the US Open. He went undefeated over Albert Ramos Violas and Maxime Cressy before losing in the third round against Borna Coric despite having six-match chances and being a break up in the fifth set.

He was seeded fifth in the French Open and advanced to the semifinals, defeating Grigor Dimitrov and Andrey Rublev before losing in five sets to Djokovic.

Tsitsipas lost in straight sets to Andrey Rublev at the ATP Finals before withdrawing owing to an elbow injury.