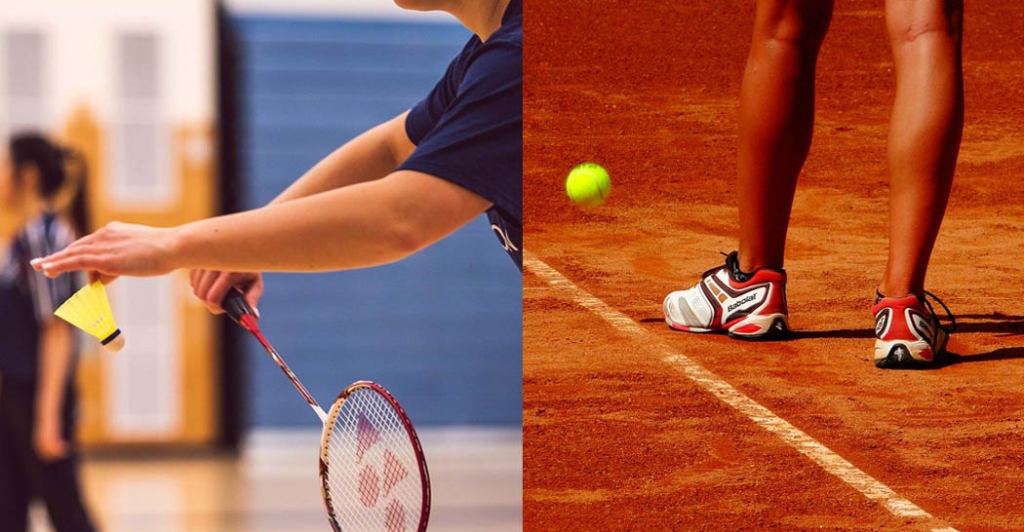 Tennis and badminton are frequently compared in numerous ways. They’re both racquet sports that need high speed and agility, as well as strong hand-eye coordination and so on. They, like many sports, are simple to learn yet difficult to master.

So, which sport is more difficult: tennis or badminton? When we compare the many areas of comparison for each sport, we discover that badminton is far more difficult physically in terms of speed, agility, and explosive force. Badminton also has many more stroke variants than tennis, so there is more to learn. Because of the smaller court and quicker projectile, you must have quick responses as well as quick feet.

It’s difficult to say which is more difficult. They are two distinct sports with distinct dynamics. They both have distinct characteristics that make them more difficult in various ways. Let’s take a closer look at what we can compare.

The most straightforward comparison between Tennis and Badminton is to compare the endurance and physical demands of each sport. It’s the most straightforward way to compare sports. Tennis and Badminton, when played at the highest level, need you to be extremely fit. However, even at lesser levels of play, you must have some endurance, speed, and power. Let’s take a look at how each sport stacks up.

Footwork And Covering The Court

Good footwork is one of the foundations of any racquet sport, such as tennis or badminton. They do, however, have various styles of footwork. Badminton combines short, quick chasses with running and leaping. Tennis necessitates some chasse movement, but it mostly necessitates a lot of sprinting and, on occasion, sliding.

A tennis court is typically 1.5 times the size of a badminton court (see our article on comparing Tennis and Badminton courts). Tennis players, particularly singles players, play from the baseline, and because the ball might bounce off the court, they must cover not just the size of the court but also the space beyond it. Tennis requires you to go possibly larger distances between shots during a rally.

The rally is ended in badminton if the shuttlecock goes out, one player hits the net, gets faulted, or earns a point. Because the shuttlecock cannot move outside of the court, you must know the size of the court you must cover as a badminton player. To traverse this somewhat smaller court, badminton needs quick reflexes and even quicker mobility. During a match of badminton, you must cover large and short distances at a high rate. Badminton requires explosive force and agility to cover the entire court.

In both tennis and badminton, you cover less court total when you play doubles rather than singles. The quantity you cover is determined by the rally’s length and the standard you play at.

Tennis matches may run anything from one hour to well over three hours at the professional level. On the court, that’s a long time. The world’s longest tennis match lasted 11 hours and 5 minutes! Nicolas Mahut and John Isner fought for three days at Wimbledon until Isner emerged victoriously.

This is certainly a highly unusual situation, and it might have gone on indefinitely due to the way the laws are written. On the other hand, badminton matches can take anywhere from 30 minutes to just under two hours. Because of the many disciplines and the overall style of play, the time of Badminton matches varies substantially.

Badminton styles differ significantly more from singles, doubles, and mixed than tennis styles. Men’s doubles matches are fast-paced and can be completed in under 30 minutes. The flow in women’s doubles is more steady. The top teams all have strong defenses, which allows the games to linger longer. As a result, the amount of time you spend on the court might vary depending on whatever sport you participate in.

Badminton matches may go up to two hours and 41 minutes. In the Badminton Asia Championships, Naoko Fukuman and Kurumi Yonao of Japan competed against Nitya Krishinda Maheswari and Greysia Polii of Indonesia. In a stunning display of endurance and perseverance, the Japanese duo came out on top.

Tennis matches, even at the highest level, last far longer than Badminton matches. The Wall Street Journal published research that looked at numerous tennis matches and compared active playtime to overall match length. Tennis matches have an average active playtime of 17.5 percent, according to the researchers. The remaining of the time is spent by players moving from point to point, changing ends, and toweling down.

In comparison, there isn’t much time spent during a badminton match. Although they have time between each point, umpires are enforcing the “continuous play rule” more than ever before. This rule indicates that the game must be played in a continuous manner with minimum downtime in between points. They also only have two minutes between games and just 30 seconds after the first player reaches 11 points. I looked at several matches and discovered that badminton had a much more active playtime. On average, it’s between 40 and 50 percent, which implies that in an hour-long match, the shuttlecock might be in play for up to 30 minutes.

The rally durations of each sport are worth considering briefly. Tennis rallies last longer on average than Badminton rallies. Rallies tend to linger longer when the player has a wider court, a slower projectile, and the ball may bounce. However, badminton rallies may be protracted, especially in doubles, when both partners have powerful defenses. A 30-second rally in badminton would deliver almost twice as many shots as a 30-second rally in tennis. As a result, badminton is significantly more intense. Between shoots, players have extremely little time. Watch the video below to see the longest rally in the history of badminton. The rally is around 4 minutes and 30 seconds long! They have a total of 255 shots to play with. That takes a lot of perseverance.

The Technique, Mastering The Shots

Tennis and badminton are both racquet sports, thus learning all of the shots is one of the most difficult aspects of both. Both games have changed over time, and new forms of playing have emerged owing to modern technology with racquets, balls, and shuttlecocks. Let’s take a look at a few strokes from each sport and see how difficult they may be.

Strong wrists are required to handle a forceful shot coming at you. Tennis racquets and balls are significantly heavier than shuttlecocks and badminton racquets. It’s challenging enough to regulate the weighted power behind certain shots.

In tennis, controlling spin is a difficult task. Playing the ball necessitates an awareness of the ball’s spin and the ability to counter or control it. This is a tough ability to master. There’s a lot of variety in playing the ball with varied slices and spins. Because of the ball’s weight, a good technique is required to adequately manage the return. Here’s a list of basic tennis shots to get you started:

Badminton offers a wide range of strokes that may be played from a number of locations. Unlike tennis, Badminton shots are taken from various heights. From performing an overhead smash to defending a smash at your feet, there’s a lot to learn. Badminton requires you to twist and spin, leap and lunge while still playing strokes.

Badminton demands both strength and dexterity. It’s high-octane, and the diversity of shots demonstrates that aggressiveness and control are required. Here are some Badminton shots to get you started:

These are only a few of the shots available in badminton. It’s important to remember that each shot might have variances. The power smash, the stick smash, the half smash, and sliced smashes are all examples of badminton smashes. This is when deceit comes into play in badminton. It’s tough to perfect, but if you can make one shot appear to be identical to another, you can put your opponents on the defensive. You have the ability to fool them, send them in the wrong direction, and interrupt their footwork.

There is no way to perfect all of the shots in badminton since there are so many. Top players are capable of doing all of them, but I doubt that any single player has mastered all of them. We can constantly improve, and certain shots are easier to learn than others for everyone.

Who Can Play Tennis and Badminton?

The beautiful thing about badminton and tennis is that they can be played by anybody who can move around the court and grip a racket. As a result, these sports are ideal for athletes who like to play at home. However, if a player wishes to compete in tennis or badminton, there are restrictions on who may compete.

The following are some of the benefits and drawbacks of tennis.

The benefits and drawbacks of badminton are listed below.

In this article:Badminton is easier than tennis, Is Tennis Harder Than Badminton?