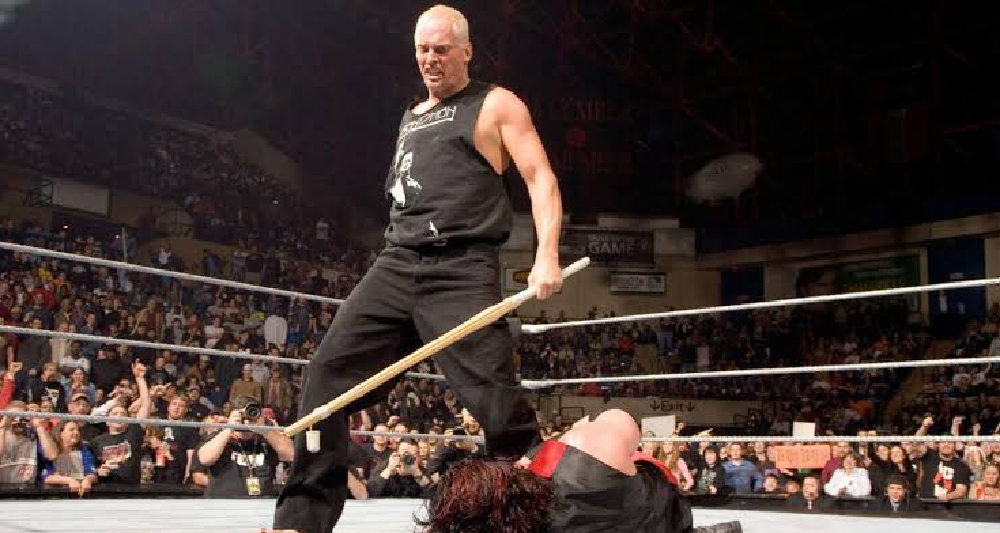 Wrestling is one of the most popular sports in the world and has had a significant impact on the evolution of other types of combat sports that have developed as a direct result of its popularity. WWE is one of the most well-known companies that has changed the wrestling industry by bringing it to new heights and making it a significant element of sports entertainment. So, have you ever wondered, “What Are WWE Weapons Made Up Of?” Well, WWE fans adore it when the company adds some extra stipulations to any wrestling match. The phases that include the potential engagement of weapons into those always generate a lot of interest from the public.

Weapons have long been a popular component of pro wrestling, and WWE fans enjoy watching as wrestlers employ a variety of weapons against their opponents in order to achieve a fair or unfair edge. It’s one of those things that adds to the match’s intensity and impact. Fans love gimmick matches like TLC and Money in the Bank because WWE Superstars are free to employ as many weapons as they want in the most imaginative way imaginable, which is a treat for the audience. These weapons, however, aren’t built to a standard, with the majority being custom-made for the WWE. So, in this article, we’ll talk about the weapons used by WWE wrestlers, as well as what they’re constructed of. So, read this article all the way to the conclusion to learn everything there is to know about WWE weapons and equipment.

What Are WWE Weapons Made Up Of?

In WWE, there are numerous weapons and environmental materials that can be used to maim and incapacitate opponents. Some weapons result in spectacular moments of total destruction. Players with a creative streak can employ the weapons to create some spectacular crashes and flames. Tables, Ladders, Chairs, Kendo Sticks, and other weapons are frequently utilized in WWE. Pay-per-views like TLC, Money in the Banks, and Hell in a Cell always have higher viewership than the others for this reason (except Wrestlemania).

In 2022, WWE created some unforgettable moments in segments and matches featuring weapons. And all of WWE’s weapons are made out of various items. WWE, for example, makes tables out of thin wood or plywood. Strengthening wires are used to make the ropes. The strengthening wires are first covered in a foam layer that is adhered to the wire with colourful tape. Hard foam mats are used to cover the area outside the ring. The barricades are often formed of hollow tube-like steel that is squared off in shape. Inside the barricade, there are foam cushions with a Velcro top that keeps the inner and exterior foam together. The apron is held together with Velcro, which matches the Velcro used on the wrestling mat. Ladders are hollow on the interior and composed of comparable light metals.

ALSO READ: Are WWE Chairs Real? Do They Really Use Them?

Weapons Which Are Used In WWE?

Let’s take a look at some of the most commonly used weapons in WWE, as well as the hidden secrets behind them.

During wrestling contests, steel chairs are arguably the most regularly utilized weapons. Even the heaviest wrestlers can be knocked off their feet by the black steel chairs, which are exceedingly sturdy and terrifying. The chairs in the WWE are ordinary folding chairs, with the exception that the rivets have been broken. As a result, the metal of the chair is more likely to collapse on impact. Before the wrestler, the attacker frequently slams the chair against a few hard objects to shake up the frame and weaken it.

Wrestlers used to take chair shots to the head, which was incredibly risky yet necessary for the interest of people. Wrestlers are now only allowed to take chair shots to their chest, sternum, and back, which is a more safer option. Chair shots hurt just like they should, regardless of what you think or what anyone tells you. Only in this case, the shots are administered by trained professionals to other skilled specialists.

Wrestlers commonly utilize ladders to climb on or jump off in order to complete a move. The ladders are composed of steel and can be extremely hazardous. Ladders, on the other hand, are also used as weapons to attack opponents, which can be extremely deadly. When it comes to ladders in the WWE, though, there is a catch. Unlike conventional steel ladders, the ones used for wrestling are hollow steel rather than solid steel, reducing the weight and impact significantly.

This is demonstrated by the fact that ladders bounce off the ropes rather than push them down when they fall on them. It’s also because when a wrestler who weighs more than usual steps up on it, it shakes a lot. Some of the ladders’ centres have been made shakier so that a wrestler can lay on them like a table, and once they’ve been jumped on, the ladder breaks right in the middle. Whatever the case may be, ladders are one of the most lethal weapons. Thus wrestlers raise their arms to take the majority of the shots aimed at their hands and arms rather than their faces and chest.

MUST-READ: Why WWE Is Unify The World Title?

Thumbtacks, like sledgehammers, are real in the WWE and are no different than the thumbtacks we use. Wrestlers have been observed with scrapes and bruises after falling on these cruel little weapons, as the tacks are highly painful once they hit the skin. Mick Foley’s best buddies have been thumbtacks for a long time. Cactus Jack has been utilizing the weapons for as long as anyone can remember, and he has used thumbtacks to inflict a great deal of suffering on his opponents and even himself. Nonetheless, the weapon can inflict a great deal of pain and injury, but it’s nothing compared to what wrestlers can endure.

Tables are one of the most regularly used weapons in WWE, thanks to the popularity of the Dudley Boyz. WWE also offers a table-specific stipulation match in which you can win by throwing your opponent through one. Tables are also employed on multiple occasions during all types of no disqualification matches, which typically results in loud applause from the audience. WWE makes these tables out of incredibly thin wood, which many fans may not be aware of. The table legs are also fairly far apart, so when a wrestler lands in the centre of the table, it explodes with an explosive boom, enhancing the intensity of the moment. Tables are one of the safest WWE weapons, but they must be used with caution.

The kendo stick is one of the most well-known WWE weapons, appearing in numerous matches and segments. Because the kendo stick used by WWE Superstars is hollow wood, it frequently breaks apart after a few strokes. Tapes were visible on both sides of a kendo staff, which kept it together for a few hits before breaking. However, WWE Superstars must utilize it properly on their opponents, so it is not completely risk-free. A kendo stick has been known to injure WWE Superstars in the past, like as The Big Show at WWE One Night Stand in 2008.

READ MORE: Are WWE Weapons Real? Do They Hurt?

When it comes to alien objects, the garbage bin is another favourite. Despite the fact that we have garbage cans made of a variety of materials at our houses and throughout the city, the ones used in the WWE are completely different. The garbage cans used by WWE are entirely constructed of aluminium and tin. It is no thicker than a typical soda can, and the components are strengthened to ensure it does not split from any angle. This ensures that the garbage cans don’t cause too much damage when they collide and that they don’t split on impact, causing wounds or injuries to the wrestlers. The cans are extremely light and bend quickly as they come into touch, ensuring that they do not cause too much pain.

John Cena, a notable WWE Superstar, is known for employing chains during his matches. Chains may be utilized in a number of different ways. We’ve seen Superstars wrap it around their wrist to knock out their opponents with a punch, while others use it to magnify the pain during their submission moves. These chains used in WWE bouts are 100% real, and it is up to the WWE Superstars to utilize them safely so that their opponents are not injured.

In this article:What Are WWE Weapons Made Up Of