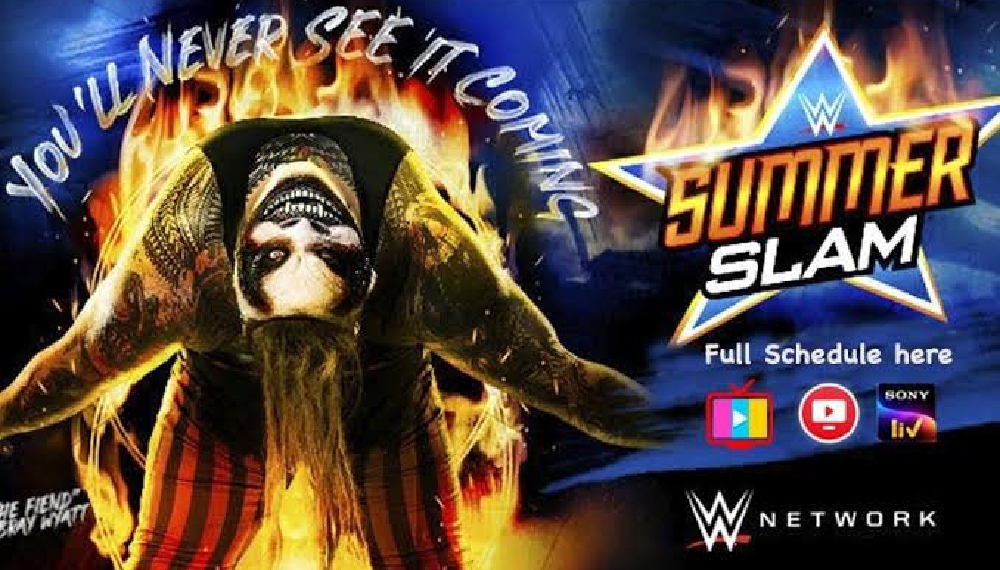 Where To Watch WWE SummerSlam 2022 Online In India? Well, before we go any further into this topic, let’s have a basic understanding of what WWE SummerSlam is. Thus, starting from basics, SummerSlam is a live professional wrestling event that has been held every year since 1988 and is produced by WWE, which is the largest professional wrestling promotion in the world. It is referred to as “The Biggest Party of the Summer” and is regarded as the second-largest event of the year for WWE, after WrestleMania. Along with WrestleMania, the Royal Rumble, Survivor Series, and Money in the Bank, this event is regarded as one of the “Big Five” most important pay-per-view (PPV) shows held by the WWE each year.

Since 2014, the event has also been shown on the WWE Network, and beginning in 2021; it has been broadcast on Peacock. On August 29, 1988, Madison Square Garden in New York City hosted the first SummerSlam. SummerSlam was staged at the Staples Center in Los Angeles from 2009 to 2014, then from 2015 to 2018, it was held at the Barclays Center in the Brooklyn borough of New York City. August was the month chosen for each and every SummerSlam event from the time it first took place all the way up until 2021. The 2022 SummerSlam will be the first occasion that the competition is held in July rather than August.

SummerSlam in the year 2020 was the first pay-per-view event that WWE held inside of their bio-secure bubble, the WWE ThunderDome. This event took place during the COVID-19 pandemic. SummerSlam of that year was advertised as the “largest event of 2021” due to the fact that WrestleMania 37 had to be staged at a lower venue capacity. This occurred after the promotion restarted live touring with audiences in July of 2021. As a result, the 2021 SummerSlam surpassed all previous SummerSlam events in terms of revenue. Continue reading this article to learn more about SummerSlam 2022.

Where To Watch WWE SummerSlam 2022 Online In India?

WWE SummerSlam 2022 will be broadcast LIVE in India on the Sony Sports Network networks. For English, Hindi, and Tamil & Telugu commentary, viewers can tune into Sony Ten 1/HD, Sony Ten 3/HD, and Sony Ten/4HD, respectively. Also, the BT Sport Box Office app, available for both iOS and Android, allows users to make a purchase of the show and then stream it live on their mobile devices. The event will be broadcast live on pay-per-view (PPV) platforms around the world, including the WWE Network in other countries and Peacock in the United States.

There are three tiers available for Peacock users: Free, Premium, and Premium Plus. You’ll need a Premium subscription to see WWE content. The good news is that this will only cost you $5 per month, which is far less than the $10 per month that WWE Network will charge you. SummerSlam will, as usual, be broadcast on the WWE Network for viewers located outside of the United States. Additionally, USA Network and Peacock Network both live stream WWE SummerSlam 2022 for fans in the United States and other countries, respectively.

What Is Peacock Streaming Service?

The Television and Streaming branch of NBCUniversal, which is owned and operated by Comcast, is the company that is responsible for the over-the-top video streaming service known as Peacock in the United States. The service, which bears the NBC logo as its name, debuted on July 15, 2020. The service primarily offers television show and movie content from NBCUniversal studios and other independent producers, as well as news and sports programming. Also, the service is offered in a free, ad-supported version with a constrained selection of material; premium tiers offer access to a greater selection of content as well as extra NBC Sports and WWE Network programming.

On July 15, 2020, Peacock began offering its services nationally; by August 2021, the service had attracted at least 54 million subscribers. On November 16, 2021, Peacock was made available to all customers in the United Kingdom and Ireland as part of a free soft launch on the Sky and NOW platforms. Peacock continued to grow in Sky territories on January 25, 2022, when it soft-launched in Austria and Germany.

The service had 9 million paying members and 24.5 million active monthly accounts as of January 2022. The number of monthly active accounts for the service has reached 28 million as of April 2022, while the number of paying customers has reached 13 million, representing a growth of 40% from the previous quarter. Additionally, a 25% year-over-year increase in engagement was recorded.

When Will SummerSlam 2022 Take Place?

The first SummerSlam that will not take place in August is slated to take place in Nissan Stadium in Nashville, Tennessee, on Saturday, July 30, 2022. On April 22, tickets went on sale, and there were also premium hospitality options. The previous SummerSlam logo, which had been in use for the previous 12 years, will be replaced with a new one for the first time in a while.

Matches Which Will Take Place In SummerSlam 2022

Below is a list of the matches scheduled for SummerSlam 2022.

Match of “Last Man Standing” At WrestleMania 38, Brock Lesnar was dethroned by Roman Reigns, who thereafter claimed the title of undisputed world champion. However, The Beast is coming back for another go at the titles, and the main event of the program will be a matchup between the two heavyweights.

Also Read: Why was Summerslam 1993 on a Monday night?

2. The Usos (c) versus The Street Profits For The WWE Undisputed Tag Team Championships

Initially, The Usos were victorious over The Street Profits in a match that had a contentious conclusion. Similar events occurred on a recent RAW program in which Jimmy Uso was defeated by Angelo Dawkins. The teams will now compete at SummerSlam 2022 for the Undisputed Tag Team Titles.

Liv Morgan defeated Ronda Rousey to win the Money in the Bank briefcase and take over as the new SmackDown Women’s Champion. On July 30, though, The Baddest Woman on the Planet will have a chance to reclaim her title.

At SummerSlam 2022, Theory will have the chance to reclaim the United States Championship that he lost to Bobby Lashley at Money in the Bank 2022.

Happy Corbin expressed his displeasure with Pat McAfee’s commentary on SmackDown and made disparaging remarks against him. McAfee retaliated, though, and subsequently issued a challenge to Corbin for a fight. At “The Biggest Party of the Summer,” where they both will be, the two will compete against each other.

6. Becky Lynch versus Bianca Belair for the Raw Women’s Championship

The two enduring rivals will face off once more a year after Becky Lynch’s shocking comeback in which she defeated Bianca Belair for the Raw Women’s Title in just 26 seconds. Although Belair has defeated Lynch since that humiliating loss, this one will matter a lot. Getting the better of her arch-rival on the same stage and competing for the same title as when Lynch unexpectedly stopped her in her tracks.

In his debut match at WrestleMania earlier this year, Paul pleasantly surprised the majority of wrestling fans. The online celebrity obviously liked it, too, because he recently landed a contract with WWE. After their tag team victory, The Miz attacked Paul, ruining his big debut, and despite The A-best Lister’s efforts to reason with him, Paul’s first order of business as a signed Superstar is retaliation. Almost certainly, he’ll also get it. WWE probably isn’t in the business of having Paul lose his first match after signing a contract. Paul will win this match quite easily and prove to the crowd that he has improved since we last saw him compete.

There was a time when it seemed like one of these men would be Mr Money in the Bank, and the other would be challenging for the title at SummerSlam. Instead, Seth Rollins and Riddle are pitted against one another in a match with no consequences. The two are so good together, though, that this match may end up being the night’s best.

It’s also ironic that this match is taking place because there was a time when rumours that Rollins didn’t like Riddle very much meant that they would never face off in the ring. Both parties need a victory, regardless of who prevails. We’ll pick Rollins because he’s still smarting from losing three straight pay-per-view matches to Cody Rhodes, and Riddle can blame a future run of defeats on Randy Orton not having his back when he comes back.

The 35th SummerSlam professional wrestling live event, presented by WWE, will take place in 2022. Wrestlers from the Raw brand division and the SmackDown brand division will participate in it when it takes place. The show will feature wrestling battles that are the outcome of written storylines, in which wrestlers take on the roles of heroes, villains, or less distinct characters in tension-building scripted sequences that lead to a single match or a run of matches.

While storylines are created for WWE’s weekly television programs, Monday Night Raw and Friday Night SmackDown, results are decided by the company’s writers for the Raw and SmackDown brands. For the first time, the SummerSlam won’t take place in August this year. Instead, it will take place on July 30, 2022, at Nissan Stadium in Nashville, Tennessee.