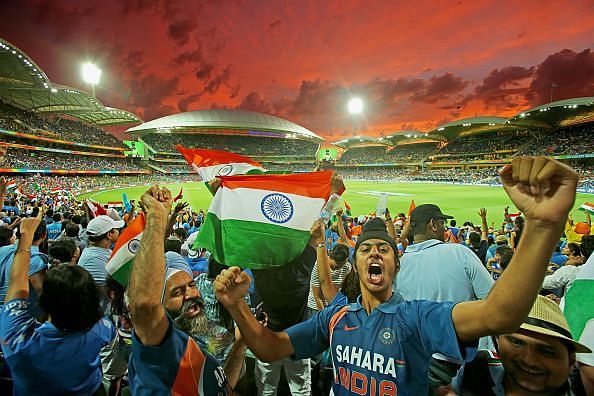 India is a multi-sporting country where a wide range of sports are performed on a regular basis. Football, hockey, badminton, and tennis are the most popular sports to watch and play. Cricket has the largest percentage of these, both in terms of a man following and playing numbers. People in India like the gentleman’s game, and it is the country’s most treasured sport.

Cricket has evolved to be a widely popular sport in India, with children playing it in the streets and the elderly enjoying it at home. In India, people of every race, religion, caste, creed, color, and gender enjoy playing cricket. In recent years, the India National Cricket Team has brought a lot of honors to the globe, which is one of the main reasons for the sport’s popularity in the country.

The historical origins of cricket are considered as a religion and players being worshipped as Gods can be traced back to when the Indian subcontinent was ruled by the British Raj via the East India Company.

The sailors of the business played cricket near Baroda in 1737 at Cambay. The game was immediately embraced by the Indian elites, and Parsees of Bombay, an educated westernized society, were the first to start playing cricket, and the game gradually spread to other populations such as Muslims and Hindus. The establishment of the Parsee Gymkhana for cricket attests to the formation of play clubs based on religion.

Today, we’ll look at why cricket has become so popular in India and why people in the nation are so enthusiastic about the sport.

Here are some of the primary reasons behind cricket’s popularity in India.

Cricket Is Easy To Play

To be sure, cricket is not as simple to learn as, say, football, which simply requires a ball and can be played alone. Cricket requires a few more pieces of equipment and is best played with at least one person.

Despite these obstacles, cricket remains a pretty simple game to learn, and the inventiveness of young people in India ensures that they always find a way to play.

As a result, you’ll frequently find youngsters playing street cricket with everything from rusted metal pipes to tattered old tennis balls. The sport’s simplicity makes it noticeable even on India’s tiniest lanes and streets.

India Has A Great Cricket Infrastructure

India has a number of cricket training and coaching facilities where children and adults may practice and learn the game.

In every Indian town, there is at least one cricket stadium. The majority of venues have excellent infrastructure and international-level coaching.

Cricket’s popularity in India is largely due to the abundance of cricket training and coaching facilities.

Cricket Is An Incredibly Lucrative Business

In India, cricket receives a lot of attention from the media. All cricket competitions are heavily covered in both digital and television media, as well as in print.

Cricket is the core focus of most commercial advertising whenever there is a cricket match.

Cricketers and cricket clubs have attracted a wide range of sponsors and ads as a result of this massive exposure. Many cricket players have amassed significant incomes by endorsing a variety of brands and starring in a variety of ads.

As a result, cricket is a major business in India, and professional cricket players are able to live a more lavish lifestyle than other Indian athletes, which is another reason why cricket has grown so popular.

Many young Indian boys see the luxury and opulent lifestyle of cricket players on television, and this inspires them to pursue a career as a cricket players.

Cricket’s popularity in India has skyrocketed thanks to online cricket betting, but why?

Cricket betting is a means for the average person to participate in the sport while also hoping to profit from it.

As a result, cricket betting allows individuals to become even more involved in the game, which has greatly increased cricket’s appeal.

Cricket accounts for 80 percent to 90 percent of all sports bets in India. This might be due to the enormous number of cricket betting sites that have recently opened their doors to Indian gamblers in India.

In this article:cricket popularity in india, Why Is Cricket So Popular In India