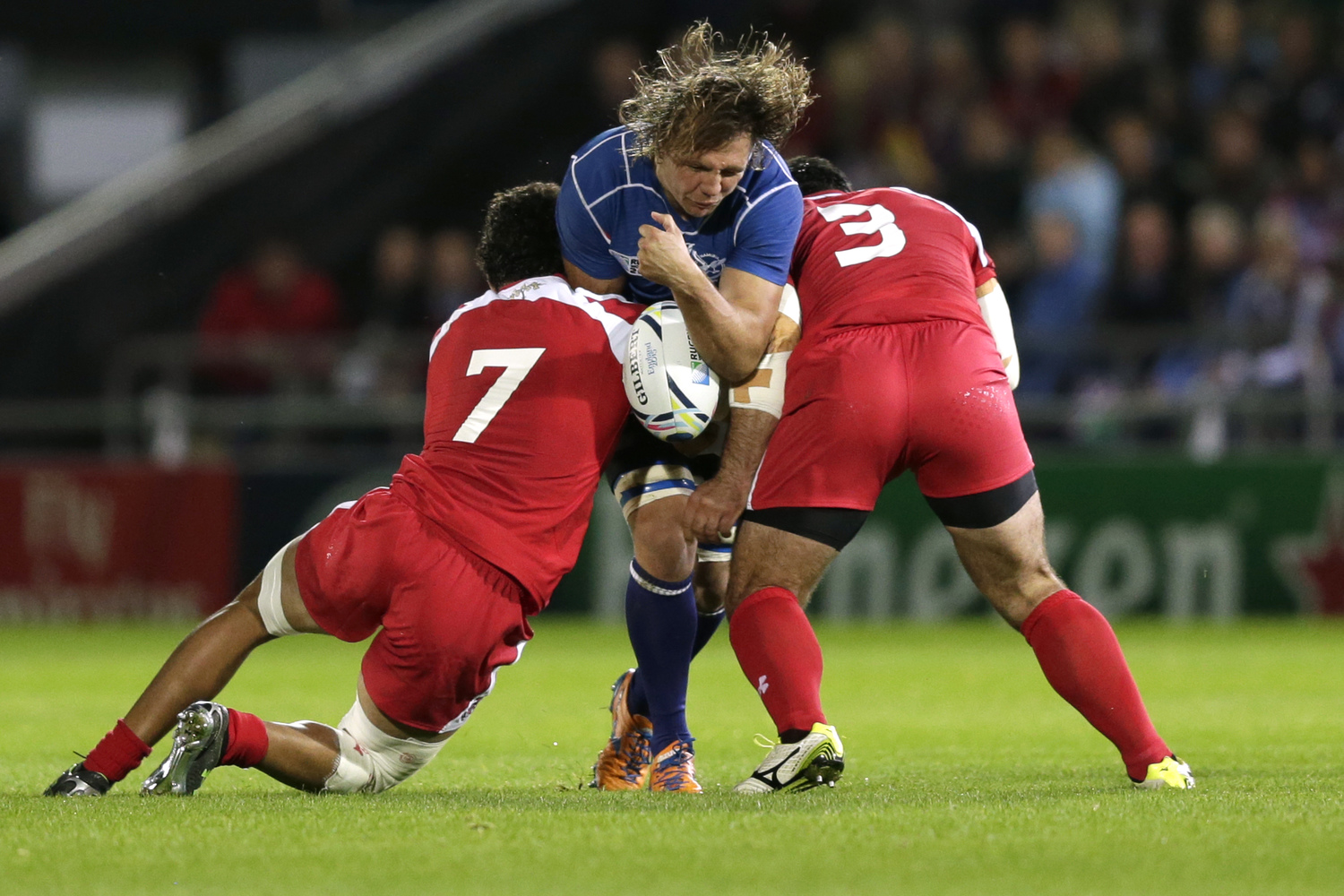 If you’ve ever been around rugby players, it won’t take long for you to realize how powerful they are. Those bulging muscles aren’t just for show; they’re put to good use on the rugby field when they’re rushing over opponents and picking them off and pushing them to the ground in a tackle. It’s time to investigate if the sport of rugby is to blame for the players’ strength or whether there are other elements at work.

Why Are Rugby Players So Strong?

Rugby players are powerful because the sport causes muscle development in the legs, arms, and back. Lifting weights helps rugby players improve their strength. Football players are also experts at managing leverage and maintaining equilibrium, making them look stronger than they are.

Why Do Rugby Players Need Strength?

Rugby players must be physically strong in order to tackle, clean out, scrummage, and break tackles. The stronger you are, the easier it is to deal with and avoid being dealt with. Try tackling a 110kg man sprinting towards you without using any strength and let me know how it goes.

Rugby is a physically demanding sport. The average player stands over 6ft tall and weighs over 100kg, allowing them to generate massive amounts of force during contact.

If a player lacks sufficient strength, he will be unable to withstand the force generated by other players, resulting in the player not gaining meters during runs, losing territory, or dropping the ball when being tackled.

Simply doing rugby tackling drills will tell you if rugby builds muscle. Run the ball 10m as fast as you can, lower your boy’s height, and hit a teammate who is holding a tackling pad. Then drive and pump your legs for another 10 meters. After 15 minutes, your legs, back, and shoulders will be on fire. Blood will be pumped into your muscles.

Rugby players spend hours each week performing identical routines that put immense pressure on their muscles. Rugby players’ muscles will increase in response to the tension.

Rugby does not simply produce muscular legs. Rugby will also force you to grow a bigger neck. Rugby players utilize their neck as a weapon to increase the strength of their tackles and finish cleanouts at the breakdown. This is why so many football players have huge bulging necks. Try utilizing your neck to finish a tackle the next time you tackle someone instead of only your legs and arms and observe how much easier your opponent hits the deck.

MUST-READ: Is Cricket A Dying Sport? The Answer Is Here!

Rugby players’ attention to strength and conditioning regimes is one of the main reasons they are so powerful. Rugby players are notorious for not only destroying themselves on the field but also for pushing their physical limitations in the weight room. Lifting weights and practicing a range of strength workouts that target the legs, back, neck, arms, shoulders, and abs help football players build strength.

A handful of rugby players are great fans of the bench press and squat, and they can put up some impressive statistics. The All-Blacks Ben Franks is well-known for his ability to squat 300kg and front squat more than 200kg. English wrecking ball Manu Tuilagi benched 190kg.

Rugby players may not be as strong as you initially assumed. I’ve played alongside rugby players who felt tremendously powerful on the field but never lifted weights and struggled to deadlift 225 pounds. Many rugby players appear to be so powerful because they have excellent technique and a thorough grasp of ideal body mechanics.

For example, suppose you are an average rugby player who plays for your local team and is a powerful tackler. When a former professional player joins your club, you begin practicing live tackling exercises with him. You go for your usual tackle, which has knocked many men down.

You lower your body height, drive off your rear foot, and try to make excellent shoulder contact with your new training partner, only to feel as if you’ve hit a brick wall. You bounce off the ex-pro who isn’t moving and is smiling. You’re perplexed by how powerful this rugby player is because you’re used to knocking your teammates to the ground and are known for your forceful strikes.

Let’s take a closer look at what transpired in this case. It’s not that the former pro athlete is so much stronger than your tackle stopped him from moving even slightly. When you went for the tackle, your partner was balanced, his feet were in a perfect position, he saw your attack coming, and he shoved his hips into your attack.

If you had timed your tackle better and waited until your buddy was off balance before going for the major hit, he would not have felt nearly as powerful and you would have almost certainly pushed him to the ground.

Rugby players are so powerful because the sport forces your muscles to expand in order to withstand the tremendous strain placed on your neck, legs, back, arms, and shoulders. Lifting weights and completing strength workouts such as powerlifting, Olympic weightlifting, and kettlebell exercises help football players develop their muscular mass even more.

Even though rugby players are stronger and more muscular than ordinary man, their strength is exaggerated because of their technical competence, balance, and optimal use of leverage, which causes them to feel stronger than they are.

In this article:Rugby players strength, Why Rugby Players Are So Big?