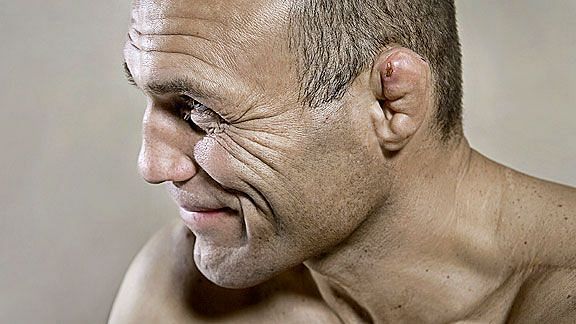 Being a UFC fighter is a very tough job. The game of
strength, power, fights, punch, kick, locks, and chock leads to the side
effects of hemorrhage, bone breaks, blood clots, and many fatal
injuries. Also, they get punched and kicked in the face often. As a
result of punching and kicking, the fighter gets some gruesome injuries.
One of the more visible injuries that UFC fighters get is a cauliflower
ear or Big Ears.

You heard it right. As the players get involved in the fights, they go
through heavy punches and kicks on the face. And the hits much often
land to those soft cartilage ears. Rather than their experience, no one
could just imagine the pain they go through those times.
Cauliflower Ears is a very truthful name, as the ear turns or is shaped
like a cauliflower. The injury is mirrored in different ways. It is a
deformity that is caused by blunt trauma or injury to the ear. The
trauma to the ears leads to a hematoma which, if left untreated,
eventually heals to give the distinct appearance of cauliflower ear.

As a medical report, When there is direct trauma to the ear, cauliflower
ears develop. It can lead to blood pooling and bulges. Since direct
trauma causes cauliflower ears, it’s not a shocking thing, that they
are a common injury in combat sports. As it’s a very mere incident to
get a cauliflower ear after the first fight but it develops with time and
athlete’s practice.

While cauliflower ears are normally innocuous, they can occasionally
cause injury to a boxer. This is due to the fact that cauliflower ears
might burst. When this happens, it might result in a bloodbath, forcing
the doctor to stop the struggle. It can really be popped out with blood
after getting a forceful opponent hit into it. As a result, it’s typically a
good idea for fighters to prevent and treat cauliflower ears before they
become a problem. Indeed, according to Healthline, there are
numerous ways to treat cauliflower ear.

Cauliflower ears can be avoided by simply avoiding getting stuck in
the ears or wearing a helmet when practicing or competing. However,
because professional fighters are not permitted to wear helmets, this
is largely sound advice for the rest of us. UFC doesn’t allow an ant safety
accessory rather a mouthguard.

In any event, if you are stuck in the ear, there are alternative options.
Cauliflower ear may be prevented by cooling the injured site as soon
as possible, according to Healthline. And of course, if a person is a
MMA fighter,/should consult a doctor about health
concerns.

And If a person is already having a cauliflower ear, a doctor can drain
the blood and make it less noticeable, according to Healthline.
Cauliflower ears, on the other hand, are permanent, thus fighters may
need to repeat the process.

And last but not the least, If a sportsperson desires “regular” ears, he
or she will undergo an otoplasty. There are cosmetic operations that
can help to enhance the look of the ear. The ear can be reshaped
using this procedure. Your doctor, once again, is the ideal person to
talk to regarding health-related issues.

ALSO READ: Is WWE Scripted? The Answer Is Shocking!

In this article:WHY UFC Fighters Have Ugly Ears!, wwe and ugly eard