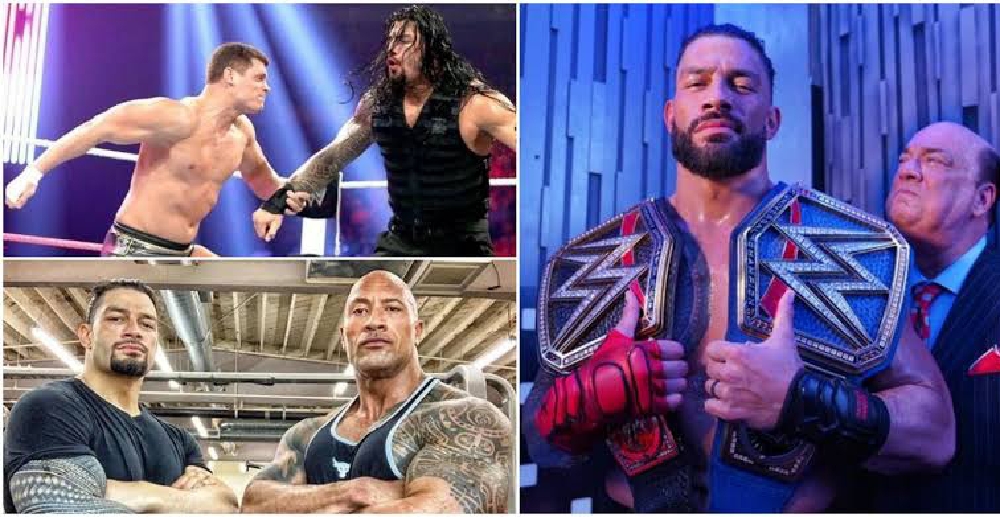 WWE has revealed that the fight between Roman Reigns and Brock Lesnar that took place at WrestleMania 38 would be a championship unification match, with the winner merging both the WWE and the Universal Championship. This has interesting consequences, some of which are trivial but will have long-term consequences. So, in this piece of article, we will talk about the “Why WWE Is Unify The World Title?” Therefore, read this whole article to gain an understanding of everything associated with WWE Unification The World Title. Well, from the moment that this fight was announced, and especially after Lesnar won the WWE Championship at the Elimination Chamber premium live event, fans have been wondering whether or not the championships will be unified.

In a title versus title match, the winner would either carry two belts and compete in a tournament to determine the winner of the championship that Superstar vacated, or the belts would be united into one. The latter appears to be the strategy, with the new champion likely switching between the two brands. Because Lesnar is a part-time performer compared to Reigns, this could indicate that he will lose.

At the same time, Reigns’ health concerns raise the possibility that he could shed weight and take a break following WWE’s biggest event of the year. The element of surprise adds to the excitement of the main event. This was already a big match, and it was set to be the main event on the second night of the two-night event. However, now that the titles have been merged, this is a once-in-a-lifetime match between two of the industry’s most illustrious figures. So, read further to take a closer look at it.

Why WWE Is Unify The World Title?

Well, the WWE Championship and the World Heavyweight Championship are two of the most prominent and well-known belts in professional wrestling. However, they were both involved in the same promotion, defying the traditional notion of only having one world champion. In a match, these two iconic titles have come together. Keep in mind that this year is 2022, which is why many wrestling fans would argue that WWE should keep both titles. Yes, the WWE’s overall product has evolved drastically over the last 20 years, but holding two big world titles in the same promotion weakened both titles’ overall significance.

Having two major world titles made sense when the WWE originally introduced the idea of two independent brands, RAW and Smackdown, in March 2002. One superstar might claim to be RAW’s global champion, and another can claim to be Smackdown’s world champion. The WWE only added a second global title because Brock Lesnar, the WWE Undisputed Champion at the time, only wanted to defend the title on Smackdown, not RAW. As a result, then RAW general manager Eric Bischoff commissioned the World Heavyweight Title and named Triple H as its inaugural champion.

Obviously, the development of a second-world title was planned from the beginning, and no WWE wrestler in history could have made such an absurd demand three months into his career. However, on August 29th, 2011, the WWE officially stopped the brand extension and declared that Smackdown superstars would compete on RAW, restoring the WWE’s and professional wrestling businesses’ conventional methods of operation. So there’s no need for a second major global championship.

It might be constructed over months, generating significant revenue when the match ultimately takes place at a large pay-per-view event like as WrestleMania or the Royal Rumble. Consider that if this unification event takes place, it would be the ideal chance to introduce a fresh new WWE title belt to replace the current, less-than-stellar design. Many previous examples of unification matches have resulted in the release of a new title.

WWE has confirmed that Roman Reigns vs. Brock Lesnar at WrestleMania 38 in 2022 will be a championship unification contest, with the winner combining the WWE and Universal Championships. This has interesting consequences, some of which are trivial but will have long-term impacts. From April onwards, there will only be one men’s world champion. Therefore it’s up to WWE to mitigate any negative consequences.

A new design for WWE’s men’s world title should be available right away. Since 2014, the current titles have had the same style; thus, an upgrade would be welcomed. Something else than a huge corporation’s logo.WWE has the opportunity to update the world title’s appearance, and it would be wise to do so by presenting it to the winner of WrestleMania 38’s main event. The name of the unified world title has yet to be determined.

MUST-READ: Why Archery Is Important In Sports?

As the winner of the battle must appear on both RAW and SmackDown, Roman Reigns is anticipated to defeat Brock Lesnar at WrestleMania 38. The Beast Incarnate is doing the same thing, but there isn’t another male world champion to fill in for him. On RAW and SmackDown, The Tribal Chief is expected to feud with superstars. Following WrestleMania 38, he will have a larger pool of possible challengers, which will help him maintain his record-breaking title reign. The United States and Intercontinental Championships should be elevated as a result of Roman’s upcoming status as a floating champion, which might leave either RAW or SmackDown without a global title feud.

It’ll only be a matter of time when the WWE and Universal Championships are united at WrestleMania 38 until the corporation decides to unify the women’s and tag team belts on RAW and SmackDown.Because Ronda Rousey and Bianca Belair are expected to win the women’s titles, a major match between the two can be planned for an event like SummerSlam.Similarly, following WrestleMania 38, the RAW and SmackDown Tag Team crowns should be combined. It will help the tag team division on the main roster as a whole.

Roman Reigns vs. Brock Lesnar appears to be the first step toward the end of the brand split, however slowly. It will happen someday if WWE follows up with unifying the women’s and tag team titles after WrestleMania 38. While maintaining two different rosters for RAW and SmackDown is desirable, WWE may be better suited to merging the two once more. A number of key players have left or been released, reducing the depth of the blue brand’s lineup. As a result, the brand separation, which has been in effect for six years, may come to an untimely end. Another point to consider is how the roster is handled subsequently. At the top, Roman Reigns might get a little lonely.

Arguments For The Unification Of WWE World Titles

The ability to boost the value of the title and those who hold it is a major argument in favour of unifying the WWE world titles. To be clear, anyone who holds a cross-brand defended, solo world title becomes the company’s biggest name right away; they do not become a Big E Champion, where they are significantly eclipsed by other champions inside the company. The championship’s prominence is enhanced by the fact that it is the company’s sole world title. The world champion also has the advantage of being able to battle against members of both SmackDown and Raw. With one of the most common criticisms of Roman Reigns’ epic title reign being that he has run out of opponents to “smash,” this would substantially enhance his and similar reigns.

Though it may be more difficult for a WWE superstar who isn’t a past world champion or a WWE veteran to win a championship opportunity, those who can — and someone like Riddle or Austin Theory might very well do so – will be immediately catapulted to a higher level. As a result, one title on two brands is a mainly favourable concept rarely explored by the WWE, which has insisted on two world titles throughout the brand split’s existence. We can all recall the late 2000s and early 2010s, when the WWE Championship was the talk of the town and the “Big Gold” World Heavyweight Championship was an afterthought. Though both world titles are no longer considered afterthoughts as a result of being handled by two of the company’s top personalities, they were and will be in the future. Consequently, despite the drawbacks, the overwhelming rewards are difficult to overlook.

Therefore, unifying the world championships was a hazardous move, and whether it was a good one will be determined during the coming year. But, if it’s come to this, merging the tag team belts is a reasonable step that can improve the company’s struggling tag division, as well as provide the top champion with some fresh new storylines.